the "head-to-head tour" bus gets a flat tire

Spring Break at Just Up The Pike has proved to be anything but as we have hit more than a few snags up in Rockville. This morning, Henry from Silver Spring Scene and I braved rush-hour traffic to meet with Councilwoman Duchy Trachtenberg, only to discover that the councilwoman was quite disturbed by some comments I made in January while trying to make an appointment with her:

"We have yet to hear from Duchy Trachtenberg, Marc Elrich, or the increasingly elusive Ike Leggett, only bolstering my opinion that he does not like me."

If that should offend anyone, it should really be Ike Leggett, but we've already been there.

Nonetheless, Trachtenberg was not amused. "I take this serious because I've been told by my staff that you didn't call," she said testily, "and I'm offended that you would put that on there . . . I find it hard to believe that my staff would not return a call."

"I assure you, Ms. Trachtenberg," I said, surprised, "I would not lie about a missed call." I expect I will be corrected if I make a mistake anywhere on this blog, but I promise you that I wouldn't knowingly lie about something, even as minor as a phone call. This afternoon, I called her communications director, William Klein, to sort the situation out.

"No one here has any record of your calling," Klein said. "Duchy was unhappy to see that [comment] on your blog because that's not her policy. I just hope you would be able to put this behind you and we can move on from there."

"Duchy respects bloggers and cares about the County," he continued. "We respect Just Up The Pike, and we read it."

And I'm glad to hear it. Come back TOMORROW to read more about our meeting with Duchy Trachtenberg. And, AFTER THE JUMP: our not-quite-a-meeting with Councilman Roger Berliner. 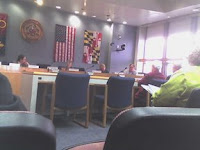 Monday's meeting with Councilman Roger Berliner was cut short due to a committee hearing Berliner wanted to attend. I was allowed to sit on the meeting, which covered a report called "Residential Infill Construction: A Review of County Laws, Regulations and Practices."

To be completely honest, the jargon of zoning laws is something that cannot be taken on an empty stomach, and even an aspiring planner like myself couldn't help but dream about the goodies being served in the Council Office Building Cafeteria seven stories below. (As it would turn out, it was closed.)

I did, however, pay close attention to the behavior of the four councilmembers in attendance - Berliner, of course, but also the three memebers of the Planning, Housing and Economic Development Committee: Marilyn Praisner, Nancy Floreen, and Marc Elrich. At any given time, at least two of the four councilmembers at the meeting had their chins propped up. Nancy Floreen left the room twice, presumably to the bathroom or water fountain. And Marc Elrich, embracing the spring weather, was the only one in the room wearing short sleeves.

An Evil Developer, or what I assume an Evil Developer would look like if NeighborsPAC did a portrait of one, sat in the back room, glaring at everyone and everything and twiddling his thick mustache. I couldn't help but wonder if he was going to follow the councilmembers back to their offices afterwards with a thick folder of Evil Development Plans to show them.
at 12:20 PM

What an imagination!
The gentleman sitting in the rear of the room was possibly one of the many employees from the Department of Permitting Services (DPS) attending the meeting.

Wow, duchy has a communications director?! The County Council is fast becoming a parking spot for congressional wannabes.