east county could get a new grocery store and senior housing, and some neighbors fear the worst

Montgomery County envisions a new town center along Route 29 in White Oak, and after a decade, plans are finally moving forward. But at one local church, there's a disagreement about whether "love thy neighbor" extends to a proposed development next door.
This Thursday, the Planning Board will hold a public hearing on and review Conley Square, a proposal to build a small grocery store and 234 homes, including affordable senior apartments, townhomes, and stacked townhomes at the intersection of Old Columbia Pike and East Randolph Road. Today the vacant 11-acre property is zoned for single-family homes on half-acre lots, so the board will recommend whether to rezone the nearly 11-acre property to allow mixed-use development ahead of a hearing at the Board of Appeals on May 2.
If built, Conley Square would be one of the first new developments along Flash, a bus rapid transit line between downtown Silver Spring and Burtonsville that opened in 2020. It’s next to the Tech Road station and a few other projects moving forward, including a shopping center with an Amazon Fresh grocery store and 390 apartments and stacked townhomes.
People are mad
Over the past month, members at the Southern Asian Seventh-Day Adventist Church - which sits next door to the proposed development and would share an entrance with it - have sent form letters to the Planning Board opposing it.
The letters claim that a new grocery store and homes will “will bring in undesirable people into the peaceful surrounding,” adding, “Some of the concerns are drugs, prostitution, vandalism, theft, and crimes.” Some letters implied that, as many members are of East Indian descent, the development would lead to anti-Asian violence.
Read more »
at 7:00 AM No comments:

This article is part one of a two-part series exploring Silver Spring, Maryland’s historical and contemporary role as a black space.

There are a lot of conversations going on right now about the future of downtown Silver Spring. Here’s one we should be having: Silver Spring is one of the region’s most significant Black business districts. 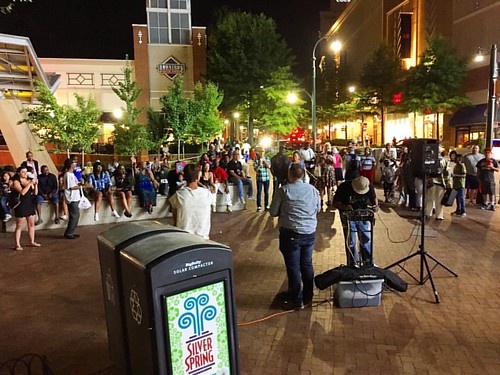 This winter, Montgomery County planners are working on recommendations for the Silver Spring Downtown Plan, which will guide the business district’s growth and evolution over the next twenty years. And a few months ago, the Montgomery County Council voted to move forward with the Silver Spring business improvement district, which would create a private non-profit to handle marketing and promotions for the downtown area.

While both of these efforts have discussed the role of small businesses in downtown, there hasn’t been a huge focus on specifically Black-owned or oriented businesses. A recent study found that of downtown’s 100+ “minority-serving” businesses, the majority of them focus on Black, Black African, and Caribbean patrons.

What does that look like in practice? In Silver Spring you’ll find a coworking space for the African diaspora and a hub of Black interior designers. On the weekends you’ll find Ethiopian, Jamaican, and Ivorian festivals, as well as the region’s only Black Pride event. And in the evenings you’ll see lines outside Black-owned clubs and bars like Society Lounge, Republic Garden, and Kaldi’s Social House, immortalized in a Tostitos commercial.

who’s speaking out against montgomery county’s plan to thrive?

Montgomery County council members are currently reviewing Thrive 2050, a “plan for other plans” that will guide zoning and policy decisions in the coming years. It updates the county’s General Plan, first written in 1964, and tackles some of the big issues of our time: climate change, segregated neighborhoods and schools, skyrocketing home prices, and a sluggish economy.

Council members may finally pass Thrive, even as a group of residents tries to stall or block it, arguing that there hasn’t been enough community input. It appears, however, that opponents want more say for themselves — not the increasingly diverse residents who need to be heard the most.

Of Thrive’s recommendations, one that’s gotten the most attention is allowing more affordable duplexes, townhomes, and apartments in areas where you can only build a single-family house.

It’s Pit Bull Awareness Month, which is a time to celebrate this misunderstood (but very common) dog breed and help get them adopted. One barrier to finding these dogs loving homes are breed-specific laws and housing restrictions, which were intended to protect people from unsafe dogs but have long failed to do so.

Meet my dog Drizzy. My partner and I adopted him last summer. Like many dogs, he can usually be found going for long walks or destroying squeaky balls. We’ve enjoyed him so much that last summer, we fostered another dog named Aruba. She’s an eight-month-old puppy who was found as a stray.

Both Drizzy and Aruba are pit bulls. Drizzy came from a rescue in Virginia, and we own a home in Montgomery County, so there was no issue when we wanted to adopt him. It wasn’t so easy for Aruba. She came from the shelter in Prince George’s County, which has banned pit bulls since 1997. Anyone caught with a dog suspected of being a pit bull can get fined up to $1,000 or even go to jail.

Instead, dogs like her usually end up at other shelters or with groups like Vindicated Pit Bull Rescue, which saved Aruba. In turn, they have to find a potential adopter outside of the county. But that family can’t live in an apartment complex or a homeowner’s association, because they often ban them too. Despite being a puppy with no record of harming anyone, she was treated like a danger because of how she looked.