ordinary or not, falkland chase sets high standard for redevelopment

"From the way preservation advocates talk about the Falkland buildings, you'd think they were architectural masterpieces rather than garden-variety garden apartments . . . The county made its choice when it started redeveloping downtown Silver Spring. To cling to ordinary, 70-year-old brick apartments is an act of mere nostalgia." - Marc Fisher, Washington Post

In yesterday's column "Nostalgia May Trump New Housing in Montgomery," Marc Fisher calls the Falkland Chase apartments at 16th Street and East-West Highway outdated and "ordinary." While I support more affordable housing and additional density downtown, I think it's important to understand how the seventy-year-old complex contributes to Silver Spring's history - and that the proposed Falkland North project, which would replace a portion of the complex with a high-rise building, has shortcomings of its own. It's a little ironic that these apartments are considered outdated now considering that architect Louis Justement, who designed "Falkland" in 1935, felt that Downtown Silver Spring was outdated then as well. In New Cities for Old, his 1946 manifesto, he envisioned recreating metropolitan Washington as a giant shopping mall, complete with freeways and parking lots. While he thought Spring was one of D.C.'s "most prosperous suburbs," Justement called the Georgia Avenue strip "blighted" because it lacked the unified design of the recently-built Silver Spring Shopping Center at Georgia and Colesville.

The only mark he left on Silver Spring, however, was Falkland Chase. He sought to build a neighborhood with the same density as row houses but a more "economical use" of the land, sparing "practically every tree" on the site along with a Y-shaped stream valley. Downtown would "never be substantially improved," wrote Justement, but in Falkland Chase he'd recreated a little piece of the city in a park. 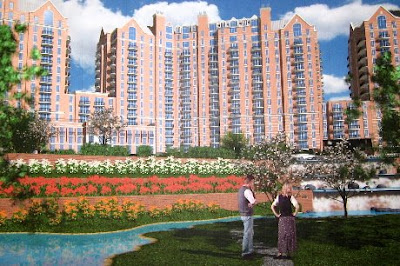 Home Properties proposes redeveloping part of the Falkland Chase apartments at 16th Street and East-West Highway. BELOW: A proposed layout for the Falkland North redevelopment.
And that's not unlike what Home Properties, whose Falkland North proposal would replace part of the complex with several hundred high-rise apartments, proposes: a very large tower behind a very elaborate garden. With 1,069 units - a fourth of which would be kept as affordable housing - Falkland North puts density right where it's needed, by the Metro. But what it lacks is human and neighborhood scale. Falkland North is a super-building, fifteen stories high and roughly a thousand feet wide. It would be larger than many of Downtown's current high-rises, including each of the Blairs' three towers and Georgian Towers, whose two buildings combined have less than 900 units.

With a sweeping entrance driveway and a large setback, the Falkland North building doesn't contribute to the streetscape as well as it could. Two smaller, six-story wings - one of which contains a Harris Teeter grocery store - do come close to East-West Highway, but the streetwall is not complete across the entire site. This is not a building meant to be seen from the sidewalk but from a car at forty miles an hour. The project has a very suburban layout, which despite its high density (over 100 units/acre, according to Home Properties) is inappropriate for a site near the Metro.

While Falkland Chase was built when Silver Spring was a quiet suburb, it contributes more to the street than many buildings do downtown. Each of the three blocks in the complex reads as a neighborhood, with multiple buildings, each with their own entrance, creating multiple opportunities for people to go in and out and populate the sidewalk. There are courtyards in Falkland Chase, but they're much smaller, and the homes fronting them still face the street. The complex may be "outmoded" in the words of Marc Fisher, but when it comes to urbanity, it actually does a better job than the proposed tower. 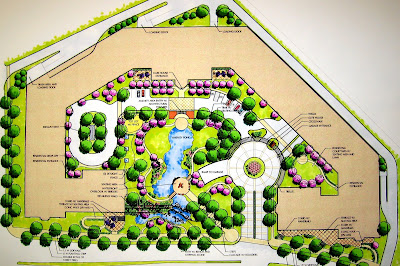 Anything short of fifteen-story buildings next to the Silver Spring Metro seems like a waste if we could be getting people out of their cars. So why am I opposed to Falkland North? Because it may continue the tradition of providing affordable housing first started by Falkland Chase, but with its massive scale and auto-oriented design, it doesn't contribute to a more urban downtown.

Its historical status may be debatable, but it's clear that Falkland Chase does some things right, from creating a lively streetscape to preserving green space - and that's why it's resisted the wrecking ball before. However, a portion of the complex did succumb to redevelopment in 1992; it's currently the Lenox Park apartments, which is a slightly better example of how high-rise buildings should look and act in the business district.

Falkland Chase sets a very high standard for anything that should go in its place. Call them ordinary, but they're of better quality than most garden apartments in East County. If anything is built at Falkland North, it should be something that doesn't just deliver density, but can create the kind of lively, pedestrian-friendly neighborhood that Downtown Silver Spring needs more of.

Give. me. a. BREAK. It's a big, not very attractive apartment building that has long outlived its usefulness. Time has passed
it by and we urgently need to redesign our urban areas to make the greatest use of mass transit. The buidling simply is poorly suited for the space. Accept it. Delaying its inevitable replaceemntis pointless. Tear it down. Now.

That's not what he meant. He wants an appropriate project built, as opposed to what is currently proposed.

Just Up the Pike has it right - its OK to tear it down, but not for what is proposed to replace it now.

I walk through the north Falkland Chase property several times a week on my way to Starbucks from Woodside. It is open and inviting to pedestrian traffic. The proposed new building would only be inviting to automobiles - it does not open up to the sidewalks and to pedestrians.

Keep the Falklands until we can get a good design for the replacement.

Agreed. Faukland North needs to go, but not substituted for the current proposal. The preservation board should not grant it historic status, nor should the planning board allow the current design to be built.

Just what the city needs- another overpriced, overcrowded high rise.

How about tearing down all the houses along Colesville Road and building a massive 30,000 occupant high rise condo development.

Or if that is to big how about 100 high rise condos and apartments.

Smart Growth and high density living is proving to be a failure.

People are not going to give up their cars. when Metro prices keep rising, and the system is breaking down.

I dont want to take up too much space, but I will comment on one more thing- the tipping point.

Soon there will be so many people crammed into these so called Smart Growth areas, it will look like something out of Soylent Green.--crowds unable to move, short tempers, fighting, and a new condition- instead of Road Rage we will have Crowd Rage-- people exploding when they can not get where they have to get to because the sidealks and the stores and the Metro is overcrowded.

When I moved to the DC area, I was told that it was an "urban forest". The recent heat wave has convinced me of the value of trees. Falkland North might be "ordinary" but the trees and green space that surround it make it a great place to live and raise children. My one month old and I like to sit on the swing in the common area and look up at the trees. You can't replace that kind of beauty.