The Town of Chevy Chase has funded a quarter-million-dollar study on the Purple Line's effects in their community. 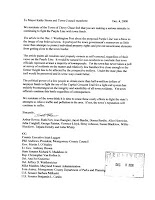 In a letter addressed to the Mayor and Town Council - and sent to twelve additional local, state and national officials - fourteen Chevy Chase residents condemned their town's use of public money to fight the proposed Purple Line, saying it has "unfairly boomeranged on the integrity and sensibility of all town residents." The town commissioned a quarter-million-dollar study on the transitway's effects on the Georgetown Branch Trail, a former freight line in Chevy Chase that is the preferred route. Two of the letter-writers, Ruth Fort and Arthur Rowse, already wrote a similar letter to the Washington Post lamenting how "self-centered" town residents appear in press about the controversy.

"We residents of the town think it is time to cease these costly efforts to fight the state's attempts to relieve traffic and pollution in the area," reads part of the letter. "If not, the town's reputation will continue to suffer."

All praise the decent people!

Seriously, the Country Club set throwing stumbling blocks in the way of progress have to be relegated to the ranks of being nothing but Old Stodgies and up-jumped noveaux-riches, who think that because their sons will go to Harvard and their daughters won't be stuck with nothing better than Brown, they can tell people who can't afford to commute in limousines "let them eat cake" because they themselves denied bread to those who need it.

The absolute essential core of the Purple Line is the attachment to the Red Line that can't go anywhere else but through Rich People Country. Hey, you never know. I might wind up living there some day, and want to commute to UM and get a degree or something. So I have to support it, like anyone would who wasn't a self-centered rich bastard trying to totally fuck over people who actually need to commute so they can clean the commodes of the aforementioned self-centered rich bastards who think they're too damn good to do any of their own housework.

Down with the Royalists! Up with the Purple Line!

Or as some folks might say, "y'all just got to know, you gonna be gettin' a got damn rail station in yo rich ass neighborhood. 'Cause that's how it's got to be. And how it will be. Power to the People, you NIMBY-ass fat cats."

Dan,
If this were a widespread sentiment within the Town of Chevy Chase, it would have shown up last year during their budget hearings or during their election.

Every political subdivision in Maryland has an annual budget that is passed in the spring by its governing body. This is a transparent process and there is opportunity for public input. It is an expression of the priorities. The Town of Chevy Chase Council's decision to hire an engineering consultant was made last spring during their budget deliberations. I understand that many Town of Chevy Chase residents expressed their support for this line item and only one resident voiced opposition.

Also, municipalities like the Town of Chevy Chase have two-year terms for their elected council with staggered terms. Half the council members are on the ballot every year.

It is a more democratic system than County or State elected office. Voter turnout is typically much higher and there is little or no campaign money involved (I will elaborate on these points in a future blog posting for MPW).

In a small municipality - if you have an idea about what the priorities should be, you can run for the Council. Municipal Council members serve part-time and are typically unpaid or receive small stipends (Unlike County and State elected officials).

Every single candidate who ran for a council seat in the last Town election campaigned in favor of the trail.

The effort of the Town of Chevy Chase to promote BRT as an alternative to LRT in order to keep the Purple Line out of their neighborhood may boomerang more than to just give the Town a bad name. Thanks in large part to the Town's consultant, Sam Schwartz, BRT is drawing much more interest for the Purple Line. But Schwartz' efforts to sell the Jones Bridge Road alignment on behalf of the Town is not going nearly so well. MTA has brought forward a study that shows that even when the impact of BRAC is taken into account and a "one seat ride" to the Medical Center is included, BRT will have a higher ridership and better cost effectiveness if it follows along the Georgetown Branch Corridor to Bethesda and then is extended up Woodmont Ave. to the Medical Center. The M-NCPPC staff, and representatives from the Mont. Co. Council staff and Mont. Co. DOT all agreed at the Dec. 8 Planning Board work session that these study results "make sense".

So, the Town is having some success selling BRT as better than LRT, but is failing to have any success in selling the Jones Bridge Road route. Their study is boomeranging to make it more likely that it will be buses instead of quieter and emission free light rail vehicles that will be running along their neighborhood when the Purple Line is built.

So the Town of Chevy Chase is getting double value from its efforts. It is building a bad reputation AND it is increasing the chances it will get buses instead of light rail.

I would never, ever want to live in such a selfish, elitist community as the Town of Chevy Chase.

I wonder: why does Delegate Al Carr care more about that little town than all of the tens of thousands of other constituents in District 18, including those who have "NO BUS RAPID TRANSIT" signs on their lawns on Jones Bridge Road?

Who can offer the most campaign fund donations? Town of Chevy Chase residents, or other District 18 folks?

"Every single candidate who ran for a council seat in the last Town election campaigned in favor of the trail."

That's not the point. Everyone, for or opposed to the Purple Line, is "in favor" of the trail of some form.

You know, the other good thing about campaigning in a small municipality is that even though there isn't a lot of money involved you are only beholden to the people in your town, unlike County and State officials, who are beholden to everyone. They have to consider the "big picture" and weigh the needs of the many versus the needs of the few.

So I'd assume that anyone who ran for County or State positions would also have campaigned in favor of the trail as well, not because they're beholden just to Chevy Chase, but because they also answer to Silver Spring and Kensington and Wheaton and to everyone who works in Bethesda and is stuck in the J4 or on 410 somewhere and of course the bicyclists and joggers, but not just the ones who live in Chevy Chase.

Wow, what a nasty, smear on Chevy Chase courtesy of Tom Hardman. It's a shame this debate can't occur without attempting to demonize people of a community.

What's interesting is that the post not only negatively stereotypes people in Chevy Chase but the people of eastern MoCo and Prince George's as well. News flash: these areas are not overwhelmingly poor or even working class and the people who work there are not all, or even primarily, housekeepers.

In any case, the State's own numbers show remarkably few people from Prince George's plan to ride it to Bethesda. Most people will ride only a few stops. And the great majority who will come already use public transit to get here.

The developers who support light rail on the Trail have far more to contribute than any of us individually which explains the Chevy Chase Land Company's staunch support of it and links to PLNow ACT etc. It's nice that you've bought into the social justice marketing for this project but my opinion is that this doesn't stand up to much scrutiny. Reasonable people may disagree but most seem able to do it without the nasty, bigoted rancor.

And, as for NIMBYism, the recent past President of Chevy Chase Land Company lives in the neighborhood sporting the "no BRT on JBR" signs posted in county right-of-ways presumably by ACT.

It is clear hatred of the Town of Chevy Chase keeps you up at night. Such hatred clouds one's ability to step back and think creatively. And they don't add much to civil discourse.

I'm pleased the discussion has focused more attention on Bus Rapid Transit which has a higher chance of actually receiving funding--and which is apparently good enough for Corridor Cities, NYC, and Cleveland. With a little more time, maybe it will also start to focus on the travesty of clearcutting an urban forest in the name of saving the environment and the foolishness of failing to serve directly National Naval Medical Center, a site that will an increase of 8000 new visitors/ employees each day with the relocation of Walter Reed.

David says there are going to be 8000 new workers and visitors to the Medical Center every day because of BRAC. Let's do some basic math. Let's say 1/3 of them can be induced to get out of their cars and use transit, and 1/3 of those willing to use transit are coming from the east and would use the Purple Line instead of the Red Line heavy rail. That leaves fewer than 900 new BRAC riders, going round trip for fewer than 1800 new BRAC boardings a day.

The BRT through Bethesda and extended up to the Medical Center has all of the cost advantages of BRT, will provide a one seat ride to the Medical Center, and will have higher ridership and better cost effectiveness than will BRT on JBR. Yet it is a safe bet that the Town of Chevy Chase will never support that option.
I would respect the Town more if it would just take the position that it will not support any transit on the Georgetown Branch because it does not want to lose the park character there. That position has integrity. But the Town should stop posturing that it is supporting BRT on JBR because it is the most cost effective Purple Line BRT option. It is not.

Could you let us know when was the last time you rode the bus?

Perhaps Delegate Al Carr could let us know when was the last time he rode a bus?

Light rail is perceived as a high-quality commuting and tourist experience. Riding the bus is perceived as downscale and low-class, including by lower-income people who have no choice.

The Chevy Chasers who claim to support BRT NEVER RIDE THE BUS THEMSELVES AND NEVER WILL. They simply want to create one diversion after another to prevent anything from happening. Witness the shifting rationales for their opposition to the Purple Line. One day it's the trail, the next day it's climate change, the next day it's development at Chevy Chase Lake. Any argument will work for them, as long as it keeps the argument going and creates the perception of "controversy" around this extremely popular, needed light rail project.

correction: I did see a blog post where Delegate Al Carr said he rode a bus in Cleveland.

another correction to Mr. Lublin: the "No BRT on Jones Bridge Road" signs that I saw were primarily posted in the yards of several of Delegate Carr's constituents. If there were some of them posted illegally in the right-of-way, I missed those.