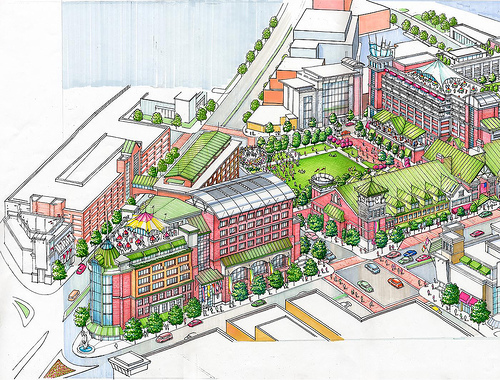 Local developer Bozzuto has pulled out of a proposed mixed-use project over the Wheaton Metro station. Rendering courtesy of Maryland Politics Watch.

- Despite his wishes to the contrary, former Councilmember Don Praisner (D-Dist. 4) will be replaced via special election as per County law, according to the Post's Maryland Moment blog. Praisner won a special election last May to fill the seat of his wife, Marilyn Praisner, who passed away one year ago on Sunday. No date has been set for this year's vote, but much as we did before, Just Up The Pike hopes to interview all of the registered candidates for our voters' guide.

Funeral information, along with the names of two funds established in the Praisners' name, can be found at Don Praisner's former campaign website.

- Local developer Bozzuto has withdrawn as the developer of a proposed mixed-use project atop the Wheaton Metro station, ending their six-year contract with WMATA because they were unable to find tenants for office buildings to be built on the site. It's another blow for the Wheaton business district, where Circuit City, Office Depot and the Montgomery Cinema 'N' Drafthouse all closed within the past few months.

- The Georgetown Running Company, a store with locations in Georgetown (surprise!) and Chevy Chase, is sponsoring an anti-Purple Line 10K run along the Capital Crescent Trail in March. On the Finish the Trail blog, Wayne Phyillaier asks why the so-called "No Rail on the Trail" race is being held on the portion of the trail where the Purple Line will not be built, noting that that segment of the Capital Crescent isn't even in good enough condition to handle a large organized run.
at 12:01 AM

i suppose it could've looked more like a ride at disney world.