Over the past month, two American cities gave streets back to the people, turning space once restricted to cars into plazas. Last weekend, it was Times Square in New York; just two weeks ago, San Francisco put out IKEA chairs and cardboard bollards to turn some underused asphalt into a temporary piazza. I'm still in shock looking at photos of people dancing and playing catch on what was once four lanes of downtown traffic.

Both projects have been well-received for creating open space in the crowded city, and I'm wondering how this model could be used - on a much, much smaller scale here. One place might be the intersection of Sligo, Chesapeake and Chicago avenues in East Silver Spring. Sligo is the local "Main Street," lined with apartment buildings, schools, and locally-owned businesses. This corner is a community gathering place; when school buses stop there, kids pour out into the street, stopping to chat or heading into Iva's Beer and Wine for a snack.

"This is where we went to scream after the Supreme Court said Bush won," civic leader Karen Roper said when she first introduced me to the neighborhood in 2006. "It's like our barbershop - [where everyone comes to meet]." The corner store at Sligo, Chesapeake and Chicago avenues in East Silver Spring.

Chicago and Chesapeake are both residential streets with considerably less traffic; in fact, Chesapeake is only a block long. The three streets meet in an awkward cross shape, and both Chicago and Chesapeake intersect with Sligo Avenue, barely thirty feet apart from each other. Two intersections mean more turning movements on and off of Sligo, holding up traffic. It also means two more places where cars and pedestrians conflict with each other. Worst of all, it's a lot of asphalt that isn't being fully utilized.

On his website Montgomery Sideways, pedestrian advocate William Smith has posted a plan he's working on with the MoCo Department of Transportation and East Silver Spring community to make Sligo Avenue safer for walkers. (This Saturday, May 30th at 11am, MCDOT is conducting an "on-site review" of the area.) The Sligo/Chesapeake/Chicago intersection is one of the spots his Sligo Avenue Accessibility Project studies. There, he proposes curb bump-outs, wider sidewalks and a pedestrian refuge island in the middle of Sligo Avenue. 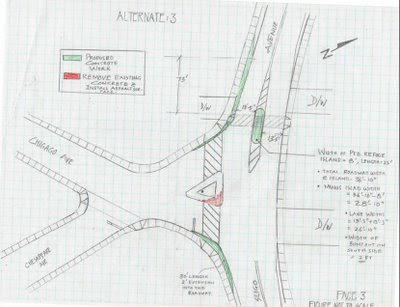 William Smith's proposal for pedestrian improvements at the Sligo/Chesapeake/Chicago intersection.

View sligo/chesapeake/chicago in a larger map
My proposal for a plaza on the currently underused portion of Chesapeake Avenue between Sligo and Chicago.

If we want to make the intersection more pedestrian-friendly and take advantage of its local significance, it might be worthwhile to consider making part of it into a plaza. The fifty feet of Chesapeake Avenue between Sligo and Chicago could be closed off to vehicles, meaning that cars coming from Chesapeake would have to turn right at Chicago before turning onto Sligo. There would be one fewer intersection and one fewer street for pedestrians to cross.

In the new plaza, tables and chairs could provide places for people to sit, eat and mingle. Planters and bollards could be used to define the space and make it clear that cars do not belong here. The market's parking is on the street and in a lot on Chicago Avenue, so they wouldn't lose any vehicular access to the project. But they do have a new amenity - public open space, a rarity in a neighborhood of apartment buildings and homes with private yards.

The best part about this proposal is that it's temporary, an opportunity to see - as New York and San Francisco are doing - how well these spaces are received and how they could be improved upon. In San Francisco, the 17th Street Plaza was created by painting the asphalt yellow; in New York, Times Square was closed with a few well-placed Jersey walls. It's not pretty, but it's a quick and dirty way to create and troubleshoot a public space. If it succeeds, we could see future "instant plazas" throughout East County. There are plenty of opportunities to do this on underutilized streets and parking lots (as the Emergent Urbanism blog explores in California), creating a "sense of place" in areas where it isn't readily available.

This is, after all, the place that laid out 35,000 square feet of plastic grass and turned it into a people-watching paradise. We can do it again.

Cross-posted (sort of) on Greater Greater Washington.
at 12:00 PM

Dan, for some reason I think you have either forgotten, or have never seen, that part of Pennsylvania Avenue NW in front of the White House which was closed off for security reasons, and then became a popular street skating park.

The traffic there used to be very heavy. Now there is a lot of inline skating and frisbee catch happening.

This Sept will be "Natioanl Parking Day" again - NOT what you think - I plan to stage a parking-space greening in downtown DC by the Convention Ctr. -- One here in SS would not be a bad idea either.