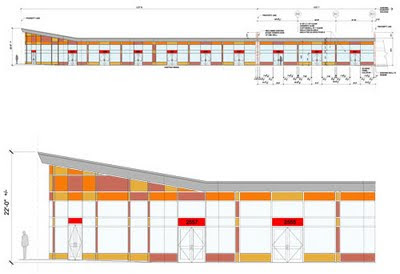 Reader Dave Dildine sent me this tip about the redevelopment of the Triangle Park shopping center on Ennalls Avenue in Wheaton, formerly home to El Pollo Rico and Ranger Surplus. At the Wheaton Redevelopment Advisory Committee's meeting in June, board members discussed developer Leonard Greenberg's ongoing plans to build a new shopping center on the site, which is currently being cleared. The meeting minutes say "Some committee members expressed concerns regarding the appearance of the new building," which is clad in yellow concrete panels.

Sounds a lot like Georgia Crossing, the recently-built shopping center a block away at University Boulevard and Georgia Avenue also clad in yellow concrete panels. The architect for both projects is Steven A. Karr, who Dildine calls Wheaton's "town architect." I can't think of another local architect who's had as big an impact on East County, whether through renovating old buildings or starting new. Working with Greenberg, whose Greenhill Capital Corporation owns most of the retail in Downtown Wheaton, Karr has designed dozens of buildings in Montgomery County's central business districts over the past twenty-five years. Sixteen of those buildings are in Wheaton alone. In 1986, he designed new façades for the Wheaton Shopping Center on Georgia Avenue (left). Three years later, he turned the original Gifford's ice cream parlor at Georgia and Sligo into a child care center. And in 1990, he even renovated the Anchor Inn, which would be razed and replaced with Karr's Georgia Crossing last year. His trademarks are easy to spot: simple geometric forms, bright colors, and neon accents. While some of his projects can look quite garish, Karr's work is much friendlier than the drab, grey buildings they replaced.

View steven j. karr: east county's "town architect" in a larger map
In 2004, Karr did a design study for Greenberg that envisioned a 600,000 square-foot mixed-use complex on the former Anchor Inn site at Georgia and University. While there was general support for the zoning change needed to make that happen, by 2006 Karr complained that Wheaton had "missed the boat" for redevelopment as the economy slowed. Hence Georgia Crossing, a series of one-story strip retail buildings completed in 2008 and still mostly vacant as the recession bottoms out.

I've had a love-hate relationship with Georgia Crossing. Urbanistically, it outdoes the Anchor Inn, which hid behind a parking lot and covered its windows with heavy curtains. The new shopping strip cozies up to the sidewalk, with lots of big, open windows, awnings, and chairs and tables for eating. But aesthetically, it's classic Karr: bright colors slapped on an otherwise basic strip-mall box. Window dressing, if you will. Projects like this may not be setting the best precedent for future buildings in Wheaton: just look at the recently-completed MetroPointe apartments at Georgia and Reedie. Seeking to make a large block look like several smaller buildings, architects Torti Gallas and Partners took Karr's enthusiasm for color and went to town with it. As a result, there are too many colors, slammed together in combinations that are occasionally pleasing but too often unsettling. (Were they embarassed? A Google search suggests you can't find it on their website.) MetroPointe sought to create a neighborhood in one big move; Karr and Greenberg, meanwhile, created a neighborhood over three decades with several smaller moves.

If there's anything that will separate Wheaton's downtown from those of Rockville, Bethesda and Silver Spring, it's that the success of Wheaton has never been dependent on a large urban renewal-type project like Bethesda Row and Downtown Silver Spring. Whether or not you like what Karr and Greenberg have done aesthetically, they built an urban neighborhood the way one is supposed to develop - one piece at a time, with small buildings that attract and sustain small businesses. Here's hoping that we keep that in mind as the revitalization of Wheaton continues.
at 9:30 AM

Thanks for this information about Karr. Now I know who to blame when I stop in front of the Gifford's/Quality Time Learning building while conducting my tours of historic "Main Street" Georgia Avenue and point out to visitors the crappy qualities of Dryvit, used to encase the building's original surface materials.