On Sunday, Metrobus will reorganize service on the busy Q2 line, traveling between the Silver Spring (pictured above) and Shady Grove Metro stations. It's the first phase of a plan to speed up buses and reduce travel times between the Downcounty and Upcounty. But for those who use the Q2 on a regular basis, the new service - which includes four new, overlapping routes - could be confusing.

The Q2 is one of the region's most-ridden lines, with over 10,000 daily riders. It's also one of the few late-night routes in Montgomery County, running twenty-two hours a day. But because of its length and frequent stops, the Q2 is prone to bus bunching and other delays. Metro says splitting the line up will keep buses on schedule and increase service on the busiest part of the corridor, along Veirs Mill between Rockville and Wheaton. In addition, creating new routes that bypass Montgomery College's Rockville campus will make the trip faster for riders headed elsewhere. 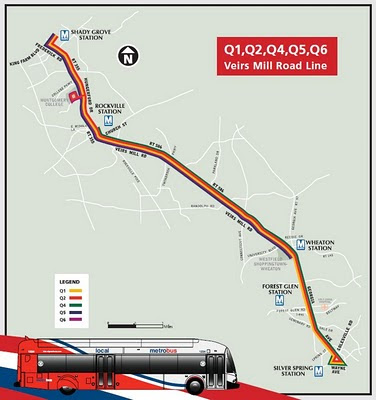 The Metrobus Q2 between Silver Spring and Shady Grove will be split into five routes. See this brochure for more info.

The new set up is as follows:

The existing Q2 route between Shady Grove and Silver Spring will remain, except it'll only run during early mornings and late evenings. It'll be joined by the Q1, which has the same route and schedule but won't stop at Montgomery College in Rockville. A new Q5 route will run during the day between Shady Grove and Wheaton, also bypassing Montgomery College.

Future plans include a limited-stop, express route running from Shady Grove to Silver Spring - similar to the Metrobus 79 and S9 between the District and Downtown Silver Spring - that was cut due to a lack of funding. Eventually, WMATA would like to see bus rapid transit along Georgia Avenue, Veirs Mill Road, Rockville Pike and University Boulevard, providing service to Langley Park and College Park as well.

Q2 users traveling the length of the route may now have to switch buses to go from end to end. East Silver Spring resident Kathy Jentz rides the Q2 to visit family in Germantown and testified at a public hearing last October about changes to the line. She says reducing service between Silver Spring and Wheaton would only shift the burden to the Red Line and the Y line Metrobus along Georgia Avenue. Despite the Q2's high ridership, only two people showed up to speak.

For more information, check out WMATA's website, details on the Metrobus Q2 study, a list of frequently asked questions on the project, and a brochure detailing the new service.
at 12:52 PM

I'm happy to see many of our suggestions were taken into consideration - including skipping the MoCo Rockville campus on off-peak times. I'm willing to give these changes a chance and try them out for 30 days or so.