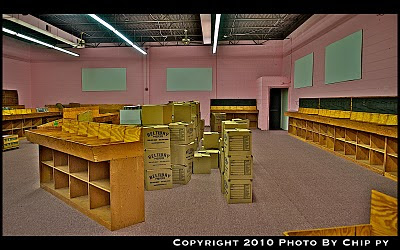 Joe's Record Paradise, the legendary record store currently located on Gude Drive in Rockville, will move to 8216 Georgia Avenue (at Ripley Street) in Downtown Silver Spring on Monday, February 1. That's what friend of JUTP Chip Py heard yesterday when he stopped by to take a few photos and and chat up Joe Lee, proprietor and occasional smoker.

The new store - this is the sixth time Joe's has moved since first opening in 1974 - will have a stage where Lee intends to book live entertainment. Playing at the grand opening will be Chick Hall Jr., best known as the son of Chick Hall Sr., a "country-jazz guitar virtuoso" whose Surf Club, a roadhouse in Edmonston (in case you don't know, that's in Prince George's County near Hyattsville) hosted many of the past century's country greats. 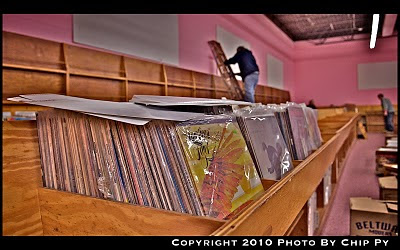 Having worked in Rockville for most of the past three years, I've occasionally stopped by Joe's Record Paradise and have been simultaneously stunned and intimidated by the enormous selection of music. Given, most local record stores (used, new or whatever) have closed in recent years, but Joe's outdoes the ones I've seen. (Even the famous Amoeba Music in Hollywood, which I visited three weeks ago? No, not really.)

Not only is Joe's not a big impersonal chain, but his family - the Lees, the very same whose name graces the building at Georgia and Colesville - has of course been here for centuries. It's a store that will hopefully nurture Silver Spring's arts and entertainment community not just as a place to buy music but a place to see it as well. (Before the Fillmore comes, of course.) Hopefully, it'll draw more foot traffic along Georgia Avenue, bringing customers to neighboring businesses as well.

It's not often that this blog gets to mention something that is generally a good thing, free of controversy or tension. (Unless there's something I don't know about.) And that's why I'm even more excited to have Joe's Record Paradise in Downtown Silver Spring. Better mark your calendars for February 1.

Of course, all photos were taken by Chip Py, who saved me from having to write a more substantial post today.
at 9:47 AM

Good to see that Joe is in a sense coming back home from his foray in the 'burbs. Joe started way back when in Takoma Park on Carroll Ave.
Welcome back Joe and good luck

This is awesome news!

What will Joe's return portend for Roadhouse Oldies?

Leesburg and Frederick are luvin' the bubble gum paint! Congratulations... looking forward to hearing The Mustangs Saturday - Springbrook Classes of 65, 68, 71, and 76! You Rock Joe... hello to John too. Laura and Gene Steele & Liz Hargreaves