kensington arts theatre takes a stab at rent, and succeeds

Say what you will about the musical Rent. It's melodramatic and sappy; it's quickly showing its age as a product of the '90's; and its glamorization of the bohemian lifestyle isn't funny to anyone who consciously steers clear of the "hipster bars" where PBR might be served.

But I can't deny that I felt moved after watching Kensington Arts Theatre's production of the rock opera, directed by Craig Pettinati and now entering the second week of a run that ends March 7. It's especially nice to see it in such a charming, intimate space stocked with young, talented actors and only a few minutes away from home. 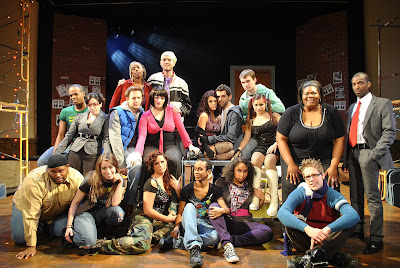 Written by Jonathan Larson and based on Puccini's opera La Boheme, Rent follows a group of friends and artists struggling to survive in New York at the height of the AIDS epidemic. We see the characters' lives over the course of a year through the lens of filmmaker Mark (Greg Meyer), who like many jaded Montgomery youth rejects the trappings of his comfy suburban upbringing to scrape by in the big city.

He's joined by roommate and songwriter Roger (Andrew Kurland), who struggles to admit his love for dancer Mimi (Amy Baughman); Maureen (Autumn Seavey), Mark's ex-girlfriend who's now seeing (and perpetually bickering with) a woman of her own, Joanne (Tina Ghandchilar); Benny (Darius Epps), their former friend who "sold out" and became a yuppie. The group coalesces around professor Tom Collins (Montario Hill) whose lover, drag queen Angel (Jase Parker, in what he calls his "dream role") brings them all together with her generosity and unconditional love.

If you've already seen the movie or stage versions of Rent, you won't be disappointed by KAT's rendition of standards like "Tango Maureen", "La Vie Boheme", or "Seasons of Love." There are a few standout singers among the cast, among them Autumn Seavey, belting her lines as performance artist Maureen. Andrew Kurland has a deep, choral voice that doesn't always fit the image of the brooding guitarist Roger, but is still a delight to hear.

A simple but clever set, coupled with the auditorium of a town hall, give KAT's Rent an intimate feel. Photo by Ernie Achenbach.

The cast is well supported by a sizable ensemble, whose members each play multiple roles - from street people to members of an AIDS support group to a hilarious chorus of the main characters' parents leaving an answering-machine message - throughout the musical or even within the same scene. You won't hear much of ensemble member Felicia Akunwafor alone, but after hearing her spectacularly powerful pipes, we hope she'll land a leading role in future KAT productions.

The performance space - inside the auditorium of Kensington's century-old town hall - is surprisingly cozy, with seating for about a hundred people. Its tall windows and creaky hardwood floors, coupled with a very simple but clever set design, easily put you inside Mark and Roger's converted warehouse loft. It's not surprising that Kensington Arts Theatre has used this hall for all of its productions over the past eight years.

What held the show back, however, was the sound mixing. At several points, the actors' voices were overpowered by the excellent backing band. Those unfamiliar with Rent might be a little frustrated to miss funny lines or major plot points, but it's an issue that hopefully can be resolved in time for the next performance.

Of course, Rent deals with some very adult topics, including sex, violence, and drug use, not to mention a fair amount of swearing and a naked bottom. In other words, bring your teenagers. They're best prepared for the onslaught of take-no-prisoners optimism and reckless angst that Rent's represented for fifteen years. Hopefully, they'll come out of this production inspired, if not by the musical itself, than by a talented community of artists not much older than they are.

Rent runs on Thursday-Sunday through March 7 at the Kensington Town Hall, 3710 Mitchell Street. A special thanks goes to Kensington Arts Theatre, who not only provided us with free tickets to see Rent, but deftly and graciously handled a box-office mixup. For more information and to buy tickets, visit their website at katonline.org. Also check out this review from What's Up Wheaton?
at 9:36 AM

I went to see Rocky Horror there this fall and the production was full of great imagination and energy. I thoroughly enjoyed it and hope I'll be able to make it to see Rent there as well.