If you follow Just Up The Pike on Facebook or Twitter (and you should!), you've probably heard me talk about my favorite restaurants in Silver Spring, places like Urban Butcher and Denizens Brewing Company. But I haven't spent a lot of time at zpizza on Ellsworth Drive, which at 10 years (has it been that long?) in downtown Silver Spring is practically an institution compared to some of these newer places.

Started in California in 1986, zpizza (it is spelled lowercase) considers itself the first "chef-inspired pizza chain." It has locations in 15 states and the District of Columbia, as well as South Korea, Vietnam, and the United Arab Emirates. The other week, I was invited to participate in a press dinner to try out some of their new menu items.

Why did I do it? Well, four weeks ago I moved out of the group house I was living in Park Hills, which our landlord put up for sale, and moved back in with my parents while waiting to move into my new home, which is a topic for another post. Zpizza offered to deliver pizza for 8 to my parents' house, and not being a great cook, I was eager to contribute to family dinner, especially given my family's predilection for Little Caesars.

When the pizzas arrived, I was a little shocked at how much we got: 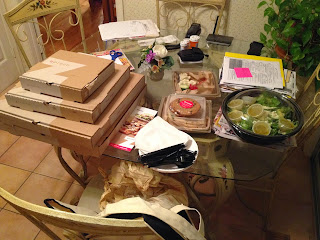 That's four pizzas, a salad, and a "Mediterranean plate" with hummus and what they call "zbread," which is basically pizza dough baked until crispy. 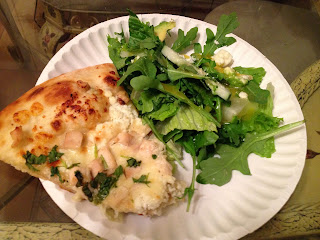 We had enough pizza for dinner, lunch the next day, and dinner after that. I'm hopeful that, as I move out of my parents' house next week, zpizza will start to enter their regular pizza rotation. After all, it may not be as fast as Little Caesars, but it was really exciting to eat something that clearly a lot of thought an effort had gone into. You even feel better afterwards.

You can try some of these new pizzas for yourself tomorrow, Saturday, September 20 from 1 to 3pm at zpizza in downtown Silver Spring (815 Ellsworth Drive, across from the Civic Building). They'll be at 11 other locations in the District and Northern Virginia as well before embarking on a nationwide tour. For more info, visit their Facebook page.

Note: I didn't get any compensation for this post, just pizza.

FYI, a free meal is compensation. Dinner for 8 isn't cheap. This isn't attending a press event, it's a business sending you free stuff. Your post reads like an advertorial and never mentions anything about the price or what the value of your free meal was.

I'm generally a fan of Just Up the Pike. It's a small blog and you probably don't know any better, but this kinda looks bad.

Your original, deleted, post was titled "sort-of sponsored post: family dinner at zpizza" so you clearly knew it wasn't just a free slice of pizza to taste and review. Showed up as the second post in my Feedly feed, even though you deleted it.

It's OK to accept stuff in exchange for an article or advertising, but you do need to be honest about it.

Thanks for commenting. You know, I very rarely accept offers to do things like this and I don't always get it right. I appreciate your feedback. What do you think I could have done differently? Do you have experience with things like this, and what would you do in the same situation?

I changed the headline back. Again, I appreciate your feedback! Thanks for keeping me honest.

I don't know if I can post links, but search for "blog disclosure example". At minimum, at the beginning of the post you should say something like "I received XYZ in exchange for this review", it depends on what the deal with Zpizza was.

The writing style really looks like an advertorial. "When the pizzas arrived, I was a little shocked at how much we got". As a reader, I don't know what that order would be like if I placed it myself. I can't compare your free experience as a blogger to what a customer may pay for. Reviewers/critics generally walk a fine line because if they know you're writing a review they have incentive to give you something different. I'd also want to see want to see "This order would cost $XX if you placed it".

The review was a fluff piece, it used Little Caesar's as a comparison (like comparing Elevation Burger to McDonalds, they're very different restaurants), and adding in the compensation it just fails the sniff test.

These are new menu items that I don't believe are available on their menu yet, so unfortunately I can't really speak to how much they're worth. I noted that in the post.

I've been doing this for eight years, and I always stand by everything I wrote. I'm glad you're reading and I'm sorry you didn't enjoy this post, which as I noted is something of an anomaly. Hopefully I'll have more things to your liking in the future.

Just Up The Pike is shredding the moral fabric of America.

Glad they have come to the area. Had them once out in California, and had the best non-dairy cheese ever on one of their pies. It was my first good meal after a six day backpacking trip, so take my recommendation with a small grain of salt.

Maybe just profiling SS restaurants more often would make it less shocking to all of a sudden have a advertorial. (Not that that's a bad thing in and of itself.) Your blog covers development planning and other miscellaneous topics about Montgomery County and beyond, I think food and the diversity of food in the county is an asset and descriptive of what our county is and has become and where it's going. There are plenty of examples of blogs who have used advertorials to promote products their readers may enjoy. I think food and supporting local businesses is aligned with the intent of just up the pike, maybe just refine the approach a bit.