a Just Up The Pike special report. 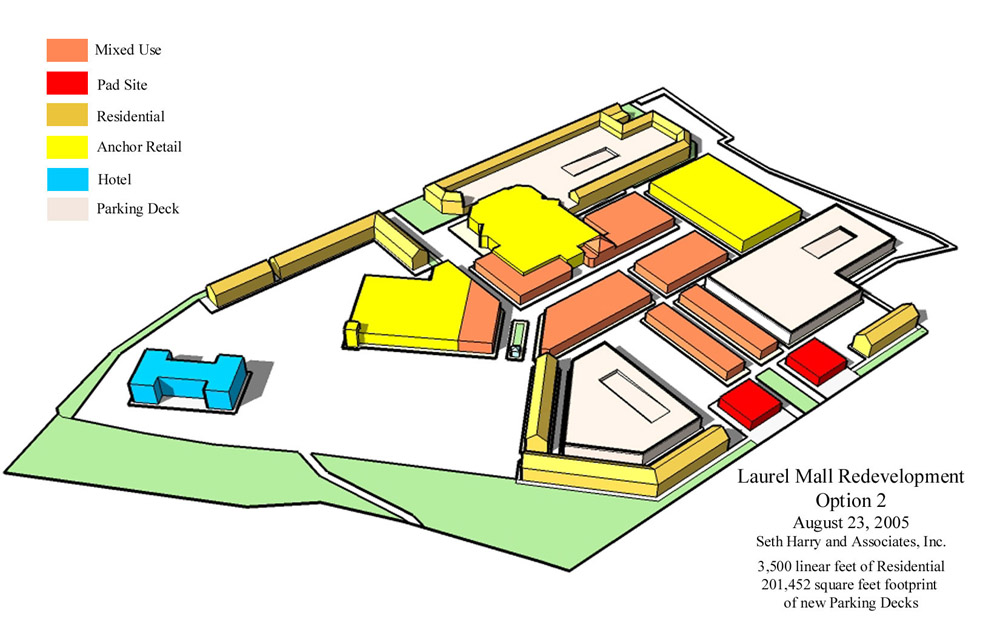 ABOVE: One proposed scheme for the redevelopment of Laurel Mall. After last year's walkway collapse, the moribund Laurel Mall probably earned its page on DeadMalls.com. Built in 1981, it's one of the youngest malls in the region but has had a fast fall from grace. But after next month, prodigal shoppers in all four of Laurel's counties might have a reason to go back. In January, mall owner Somera Capital Management and manager General Growth Properties (better known for the Mall in Columbia) plan to make a big announcement next month about an even bigger transformation for the almost-dead mall.

The Laurel Leader has already written about piecemeal renovation efforts that already have patrons wondering what else is in store. However, all that the developer and the City of Laurel have said so far is that the mall will take cues from the open-air Bowie Town Center. However, these conceptual drawings from urban planning firm Seth Harry and Associates (also responsible for planning the Forest Glen Seminary redevelopment) give us a better idea of what the new Laurel Mall could look like. 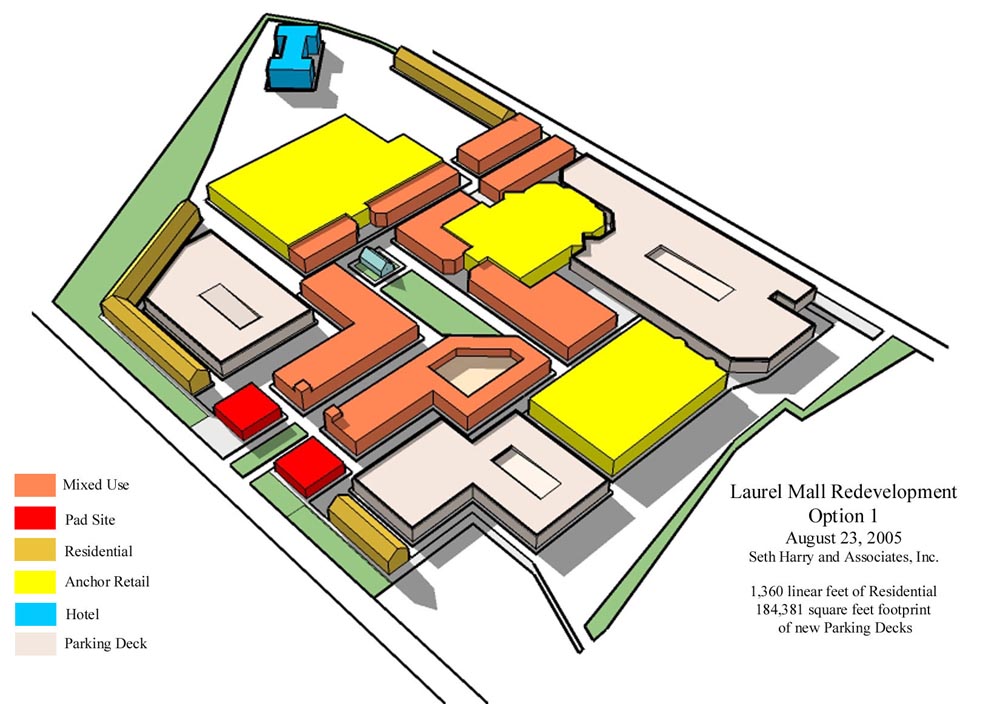 For starters, the roof is gone, and the existing department stores (in yellow) are all that's left, except that they're now lined with "mixed-use" buildings (in red) - shops and offices and possibly even residential. Along Route 1, where the streetscape currently consists of giant parking garages, you'll see low-rise residential buildings and a couple of "pad sites" (I suppose they mean restaurants, banks, things like that) surrounding the main entrance.

You could say Laurel's trying to undo what the Mall did to their downtown in the same way that Rockville is with their town center project (pictured). Rockville's new town square is small and intimate, the same way Laurel Mall's square, in what was the food court, might feel when completed.

These drawings are all we have, but they suggest great things in store for Laurel Mall and perhaps the entire Route 1 corridor. I've long felt that Laurel hasn't done enough to revitalize its business district. However, this project might put the city on par with not just nearby College Park and Hyattsville, but also destinations in Montgomery County (here's looking at you, Silver Spring). It might also benefit from a proposed Green Line extension, depending on where it goes.

The only thing that could threaten any redevelopment plans in Laurel is the Konterra "mini-city" rising outside the city limits along I-95, which would have its own regional mall and "town center" (pictured). With both this and a new Laurel Mall on the way, the City of Laurel and Prince George's County (and Montgomery County, which is barely three miles away) need to put together a comprehensive plan for the development of both.

Improving the center of Laurel should be a priority over building on the fringe, but that may not be what actually happens, meaning that the renovation of Laurel Mall might be done in vain as shoppers and retailers take their business to Konterra instead. We've overlooked Laurel before - I think it's time for them to get their due.
at 10:39 AM

Dan,
Thanks for posting this article to my South Laurel News & Views blog. I posted an article linking to yours, but it doesn't show up in your link backs because the beta.blogger linking screen wasn't working properly. Until that problem gets resolved, Please feel free to email me links to your articles relevant to Laurel and P.G. -- so i can post them as primary articles, not just comments, on my blog.
Gary Stone, GaroldS@yahoo.com

Very good article. This is the kind of article that I like, interesting. Could you do an article on why the Landover mall failed? Also curious if you know what it ever going to be done with that property, if anything is there anymore? You would think nowadays that it could be revived too. Also, do you know if landover was enclosed or open air?

OOPS,
the correct link to my South Laurel News & Veiws blog is http://southlaurel.blogspot.com

Landover Mall is better off as a Redskins satellite parking lot than as a functioning mall...

thecourtyard said...
Improving the center of Laurel should be a priority over building on the fringe, but that may not be what actually happens, meaning that the renovation of Laurel Mall might be done in vain as shoppers and retailers take their business to Konterra instead. We've overlooked Laurel before - I think it's time for them to get their due.

RE: Its obvious that the person that wrote that, intentially FAILED to mention Fair Oaks, Virginia which has two new Town Centers and they are able to continue to maintain the upscaleness of Fair Oaks Mall and the businesses along the mall ring. What I can not ever understand is why when new Development occurs in Montgomery or PG County some know it all beauracratic makes up stories that the new development(Konterra) would take most of the business away from the older developed(Laurel Mall) areas. The only way that new development would take business away from older developed areas is if the older developed areas don't upgrade to compete with the newly developed areas.

Sligo said...
Landover Mall is better off as a Redskins satellite parking lot than as a functioning mall...

RE: Yeah I'd expect that light headed comment coming from a anti-progressive left wing extremist that is not comfortable with being around African Americans in public(movies theaters) places.