east county in review: getting squeezed out

What's getting pushed out (or aside, or inside) this week?

OLD THINGS (AND OLD RESIDENTS): Silver Spring Scene was the first to bring us pictures of a redeveloped Falkland Chase apartments, and Silver Spring residents are buzzing about the possibilities. The Gazette, the Silver Spring Penguin and the Scene report a huge turnout at a meeting last week to discuss the project.

Developer Home Properties proposes replacing a portion of the New Deal-era complex at East-West Highway and 16th Street with a series of fifteen-story buildings reminiscent of the Edgemoor (pictured) in Bethesda. There would be over a thousand apartments and some retail space, including a Harris Teeter supermarket. The Historical Society says we shouldn't touch Falkland Chase because of its design and historical significance, but two-thirds of the complex will remain . . . for now. (Falkland picture from Silver Spring Scene.)

THE PURPLE LINE, ONCE AGAIN: Maryland says the Purple Line and other major transit projects will face another year of delays, meaning I won't be getting to work on time until 2014. "You get only one shot with the Federal Transit Administration," says Secretary of Transportation Michael Porcari, who wants to redo ridership estimates for the Purple Line, Corridor Cities Transitway and Baltimore's Red Line to make sure the federal government is willing to pay for it. The Silver Line in Virginia has been struggling to secure federal funding for a long time as well. (Thanks to Rethink College Park for the heads-up.) 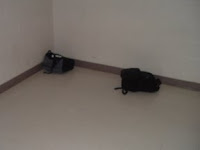 SCHOOLCHILDREN, AND THEIR BELONGINGS: The main reason I missed the bus in middle school was because I couldn't get my locker closed, and ten years later, nothing's changed. Blake High principal Carole Goodman (remember me, Mrs. Goodman?) talks to the Post about middle-and-high schoolers' frustration with tiny lockers.

MY ENTIRE LINE OF QUESTIONS FOR MARILYN PRAISNER:

"What do you have against Neighbors for a Better Montgomery!?" - Marilyn Praisner

Our chat with the County Council President (and Calverton resident) gets off to a rocky start: read the full review on TUESDAY.

Get the full scoop -- including updated images, details galore and possible rents -- from The Silver Spring Penguin.

"Falkland North: the details" from The Silver Spring Penguin

Never believe everything you read in a Gazette article. They left out the questions I and others asked. It would seem that the Gazette takes the side of the "No development" camp. I've been to several meetings and I always find it very odd how they leave out some very important statements.

You can read the full scoop at the Silver Spring Scene.

Oh yeah, don't mean to be a bugger but the link to the Silver Spring Scene report in your article actually goes to the Gazette.

Only in these forums can a blogger from a second site come in and unabashedly promote his/her blog as the place to go for the true full story.

Then, since the ice has been broken, the third sees safety in that approach.

The war for blog view has begun.

I write this without cynicism or criticism, but as a genuine compliment...to commenters 1 & 2. I mean, think about it, can you imagine the chaos in the capitalistic world of network television news if each network had the ability to chime in on its competitors and say ..."uh, oh...that's not quite the whole story. You need to come to the Situation Room".

God bless the (generally) free and anonymous speech on blogs!

Note: this comment was written after being in the house all day doing nothing but cooking, eating great food and then topping it off with a couple glases of red wine.

I welcome it. I wasn't at the meeting last week, but the Scene and the Penguin were, so I'm happy that we can direct readers to a place where they can get what they want. (I only hope that they'll be directed here when Just Up The Pike has the scoop.)

You're always welcome at The Silver Spring Penguin.

(Sorry, hyperlinking is a compulsion!)

My blog has absolutely nothing about Falkland Chase development, so there's absolutely no reason to visit it. No matter what you do, don't click here.