UPDATE: We've revised this post to reflect the new name of the builder at Aspen Ridge, OPaL. You can check out their latest projects in Montgomery County and across the region at their website, www.opaldc.com. 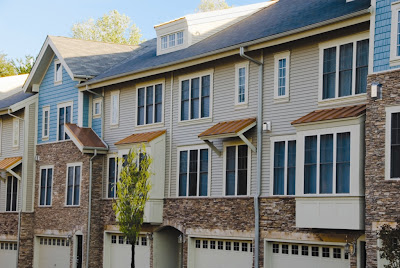 For local builder Sean Ruppert of OPaL, inspiration comes even after you've mentally hit a wall. 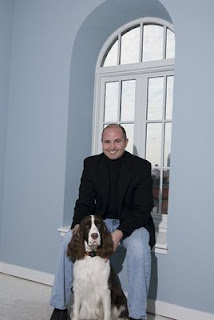 "Look at the condos next door," Ruppert says, pointing to a three-story-high blank wall visible from his office at Aspen Ridge, a new townhouse development going up off of Briggs Chaney Road. "They look really old and tired, but I just love the architecture. See how steep the roof is? It really reminded me of a ski chalet."

With the help of an architect from Boulder, Ruppert (at right) created a Colorado dreamscape in East County with his latest developments, Aspen Ridge and Albany Grove. With exteriors painted in rich blues and reds, stonework and shingles, these houses break the brick-Colonial mold. Inside, huge windows frame views of the trees and the surrounding apartments. 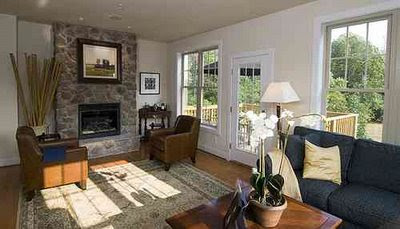 Inside the Breckenridge, one of two models offered at Aspen Ridge and Albany Grove. Photo provided by Sean Ruppert.

"You take into account the positives," Ruppert says. "This is a great location. There's a lot going on, and you're still in Montgomery County." East County's improved dramatically over the past few years, he explains. The Aspen Ridge website even refers to Silver Spring as "Montgomery County's sweetheart city."

That attention to detail - both inside his houses and inside the community - has won over the neighbors. Sort of. "The condo association next door loves us," Ruppert notes, "and the people in the apartments just don't care." 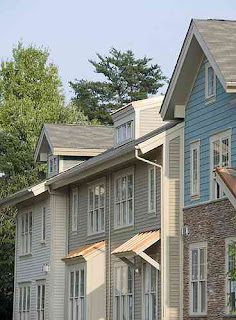 "Townhomes as Unique as You Are . . . Don't Settle for Yet Another Colonial Townhome." - Aspen Ridge advertisement

OPaL's first project in Montgomery County - the more traditional Towns of Aston Manor a few streets over - was "something safe" that would sell. But at Aspen Ridge, "We just wanted to do something that would appeal to people who expect something different from their home," Ruppert says.

"My mother worked in real estate, and she always said what makes a good home for resale is what makes it unique," states Ruppert. "When you walk through our homes . . . you just feel good. You feel good about the space you're in. Most of our competitors build ordinary Colonial homes, and on the inside, they feel ordinary."

Most builders are familiar with their competition. Ruppert used to work for NV Homes, his biggest local competitor. He actually lives one of their houses - one he sold to himself sixteen years ago. And don't get him started on Whitehall Square, the latest NV Homes development a few miles away in White Oak.

"Whitehall? Of course. They build the same thing everywhere," Ruppert says, a giddy smile crossing his face. "That's the Carnegie and the Astor. You can get it in Tysons for one million, on the Eastern Shore for seven-seventy-five, and in Baltimore for three-fifty. I was the first to sell the Carnegie in 1996 for $233,900 at the Springfield Metro."

When Ruppert got tired of shilling Carnegies, he decided to start his own firm. Since 1999, OPaL's been building small projects across the region - from Northern Virginia to Baltimore - and he'd like it to stay that way.

"I think that it's completely and utterly insane with this NIMBY mentality. If we'd had that in the '60's and '70's, no one would be living here."

"I like the size that it is now," Ruppert says. "A few employees, a few key people. I'd like to do a few more projects in Northern Virginia."

Would that mean Aspen Ridge and Albany Grove will be OPaL's last projects in Montgomery County? The red tape is just too expensive, laments Ruppert. Problems with a sewer line caused a delay, he says, in addition to others imposed by Montgomery County, WSSC and the State Highway Administration, which will start construction on the InterCounty Connector nearby next year. And that time spent means money lost.

"I can't say I would actively ever look for another project in Montgomery County," says Ruppert. "Park and Planning has been a challenge at every stage . . . it's so expensive, and every time you turn around there's a fee that wasn't there before."

Ruppert blames the current "NIMBY mentality" in MoCo for his difficulty in getting houses built - despite the fact that his project's neighbors are happy with what he's doing. "They [the NIMBYs] preach Smart Growth? This is Smart Growth," he says. "It's close-in, it's near that transportation hub." He's referring to the Briggs Chaney Park-and-Ride (at left), about a half-mile away. A visit to the station revealed a single bus stand boiling in the midday sun. One person was waiting for a bus and staring idly at the cars for sale in the Auto Park across the street.

"I understand there's more traffic congestion" in Northern Virginia, Ruppert laments, "but they're so much more business-friendly." A sales contract in Virginia or the District of Columbia, he points out, is only six pages long. In Montgomery County, it's an inch thick.

"It's such a shame because it's such a great market, and there's people who want our product," says Ruppert. "You should stay here on Sunday and see what people have been saying about the model. 'We've never seen something like this,' or 'Montgomery County deserves this.'"
at 12:01 AM

LOL "transit hub". Do they really believe their own propaganda?