cruising for booze (or not) in east county

WHAT'S UP THE PIKE: Wheaton baby falls out of window and into safety; Golf course renovation dominates town hall meeting. 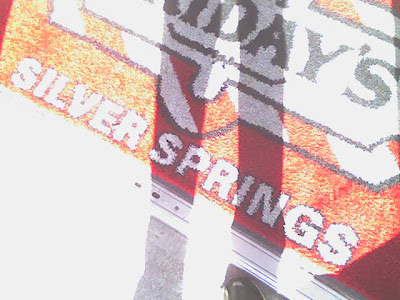 Last week, I had lunch for the first time at the new T.G.I. Friday's at The Pike and Tech Road. I should emphasize that I went on a calendar Friday, because "it's always Friday" there, as they say. Despite the "Silver Springs" printed on their welcome mat ("they always be doin' that," said the girl at the door, "they gonna change it soon"), this humble chain restaurant's opening has excited East County residents, if only for their liquor menu.

That's the result of the County's Department of Liquor Control, which regulates how and where alcohol is sold. Its tight control of liquor licenses left the East County was a somewhat dry place, save for a few bars like Harry's on Old Columbia Pike and the Corner Pocket, located on the MoCo side of the bi-county Maryland Farms Shopping Center on Cherry Hill Road. Four years ago, in anticipation of the FDA campus and the white-collar workers it would attract, the State designated the surrounding area an "enterprise zone," which made it easier for restaurants opening Up The Pike to obtain a license.

Until 2004, restaurants seeking to serve booze were limited in how frequently they could apply for liquor licenses. As Richard Layman of Rebuilding Place in the Urban Space pointed out earlier this week, that policy meant sit-down eateries would merely set up in Bethesda and Rockville rather than go through the trouble of getting licenses for additional locations in Silver Spring or Burtonsville.

It is rather sad to say that T.G.I. Friday's is all we have after four years, and the steady flow of office workers and Riderwood retirees during the lunch hour show how starved we've been for some nice restaurants. Here's hoping we'll see more sit-down places in the coming years - and, in the meantime, try the Zen Potstickers at Friday's. (I can't tell you about their drink menu because, of course, I am underage and do not have a fake ID, sadly.)
at 12:01 AM

It truly is a sad state of affairs when we rejoice over the opening of a TGI Friday's.

I went one time and the service was so laughable and the food so bland (to be expected), I won't be making a return trip to the "Silver Springs" Friday's.

Well at least WE have a Five Guys...they don't have one of those in Bethesda!

For what it's worth, Bethesda is technically getting one - across from Montgomery Mall. (Conveniently one block from my office.)

Dan, I can't find your email... are there any plans for incorporating inter-city bus (Greyhound, Peter Pan) into the Silver Spring Intermodal Center rather than the current location (I don't even know the streets there...)?