The following is a guest blog from Jean Athey, coordinator of PeaceAction Montgomery, about the Town Hall Meeting, "Can Montgomery County Help End The Iraq War?" held in Germantown last month. Now, we're well aware that Iraq is nowhere near East County. Nor is Germantown, but we figured it'd be a nice idea to talk about the world outside Silver Spring, if only once. (How about that debate last night, ay?) 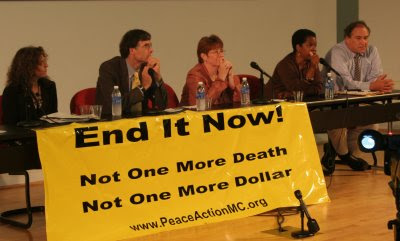 County Executive Isiah Leggett moderated a Town Hall meeting September 22 in Germantown that addressed the costs to Montgomery County of the Iraq war and occupation and presented a new County Council peace resolution that its author Council member Valerie Ervin will soon introduce. The Town Hall Meeting was cosponsored by 15 community organizations and attended by some 200 people.

Mr. Leggett spoke in support of the resolution, as did Council members Duchy Trachtenberg and Marc Elrich, along with sponsor Valerie Ervin.

The resolution makes two key demands: (1) that the U.S. government immediately commence a humane, orderly and complete withdrawal of U.S. military personnel from Iraq; and (2) that the Maryland General Assembly and the Governor limit the deployment of the Maryland National Guard outside of the State of Maryland to situations in which they are lawfully called into service under a valid and continuing authorization from Congress. (The draft resolution can be found at: <http://www.peaceactionmc.org/countyres.html>. 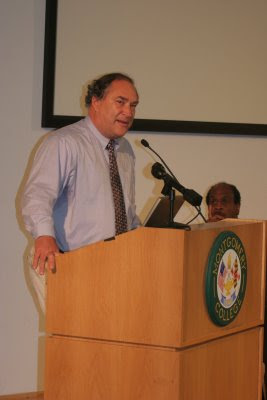 Economist Brendan O'Flaherty of Columbia University discussed the financial costs of the occupation to Montgomery County, many of which, he stated, will be felt in years to come and will be borne by our children, limiting their futures in profound ways.

Karen Dolan, a fellow at the Institute for Policy Studies, discussed reasons that local governments have an obligation to take principled stands on issues that deeply affect their constituents, even in the absence of legislative authority. She cited applicable Constitutional provisions and historical examples.

Commenting on the current national economic crisis, Dr. O'Flaherty noted that the combination of the war costs and the looming financial bail-out will be devastating, and the longer the U.S. maintains a large presence in Iraq, the worse it gets, given the current military "burn rate," which is even higher now than it was a year ago. The estimated total costs of the war, he said, are somewhere between two and four trillion dollars. That amount of money is equal to the construction replacement cost of about one-fifth of all the 1-to 4-family housing in the U.S.

Montgomery County's portion of the costs are equivalent, he said, to the cost of losing over 50,000 housing units in the county.

Mr. Leggett emphasized that his own war experience in Viet Nam impelled him to do everything in his power to bring this war to a speedy conclusion, and he sees the proposed resolution as an important stand by Montgomery County's elected officials to hasten the end of the occupation of Iraq.

Ms. Ervin's personal history also gives impetus to her support for the resolution, she said. She explained that her father died five years ago from long-term effects of Agent Orange, to which he was exposed in Viet Nam. She commented, "This resolution is the most important thing I will do in my service on the Council."

Three Council members have so far committed to cosponsor the Resolution: Ervin, Elrich, and Trachtenberg. They urged Montgomery County citizens to e-mail their Council representatives in support of the resolution, pointing out that e-mails sent to the Council president Mike Knapp also go to all other Council members. Mr. Knapp can be reached at <Councilmember.Knapp@montgomerycountymd.gov>.

If you've got something to say, Just Up The Pike is always looking for guest bloggers. While I don't always agree with the statements made, guest blogs offer an opportunity for all sides to be heard on East County issues. Contact me at justupthepike at gmail dot com if you're interested in contributing.
at 12:38 AM

Duchy Trachtenberg has time to speak at this event, which is well meaning, but whose actual effect on national policy is unclear, but no time to respond to her constituents, return their emails, or meet with them. Councilmember Trachtenberg needs to get her priorities in order.