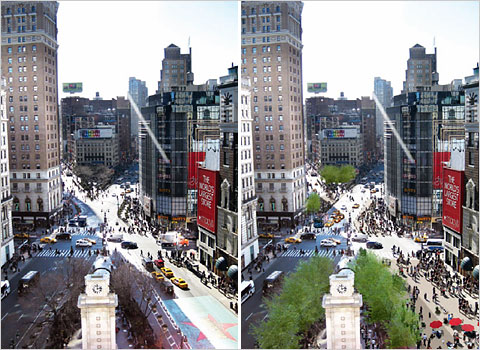 This isn't news to anyone who's been abreast of planning news, but New York City Mayor Michael Bloomberg announced last week that large portions of Broadway will soon be closed to cars, and the New York Times ran a debate between several urban planner-types about the merits of pedestrian-only malls and whether or not they actually work. Of course, East County has its own pedestrian-only mall (at least, on the weekends) called Ellsworth Drive (or Ellsworth Avenue, as some people call it, noting the irony in the suffix "Drive").

Now, Downtown Silver Spring is no Times Square, but after the bad rap that pedestrian malls (including one in D.C. on 9th Street, I think) got in the 60's and 70's, it's interesting to see how they've come back as a solution to congestion and increased foot traffic in urban neighborhoods. Now that the Ellsworth "mall" is turning five, can we call it a success? Is there anything we could've done differently, or should we start closing off other streets in the CBD? (If so, where?)

The fact that people want to be there is as clear an indication as any that it's a smashing success, emo kids and all. Studio plaza and the Library Square offer hope that this kind of vitality will spread into Fenton Village if it's not killed off by the nay-sayers.

It also goes to prove that nice background buildings with a good street wall and an active first floor are more important than a whoopdy-doo modernist design to create good public space.

Randal O’Toole's comments on the proposed Broadway closures are right on target. In particular, he notes the need to give the space a purpose and to provide security. Ellsworth does that, but Ellsworth also avoids another pitfall detailed by O'Toole, which is pronounced and massive failures of retail businesses which are dependent on automobile traffic (private or taxicab) to serve their customer base. Ellsworth Drive isn't closed to vehicular traffic during business hours.

And, again, contrast and compare between very successful urban spaces such as DC's Dupont Circle. Although there is a need to cross vehicular traffic lanes to get to the spacious park interior of the Circle, the traffic controls are well-planned and effective, and there is adequate room for pedestrian traffic on the outside of the Circle if people choose not (or don't need) to traverse the interior Circle park.

And all of this sits right in the middle of a mixed-use cityscape, not squarely in a residential-only, nor retail-only, nor offices-only, cityscape.

Making businesses impossible to get to other than on foot is a stupid idea, in general. Why walk to ride a train so you can walk some more, when you can just walk to shop where you are? You'd better have some really high-quality attractions or people will just shop in their own neighborhoods or drive to where it's convenient to shop. And even if you turn a place into a destination via high-quality attractions, there's only so much you can carry home with you on public transportation.

Don't just yet write off the automobile as a major factor in the life or death of business districts. Remember the 15-minute rule.