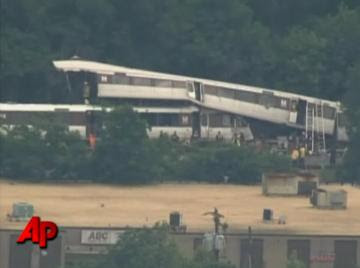 I wake up late during the summer, but not after a few false starts. Yesterday, the first time was around 8 a.m. or so. I heard my mother trying to explain to my father how to use the Metro. He works at Union Station, but usually drives there. I like having control over my commute, he says. He drove even when he lived in Wheaton for three years, literally on top of the Metro.

But this week his car is in the shop. I'll take you to Glenmont, I heard my mother say. At the bottom of the escalator is the farecard machine. Buy one and go through the turnstiles to the platform.

She ended up driving him to work instead. In the afternoon I drove him home. I've taken the train to work exactly twice, my father says, in the twenty-five years I've lived here. The first time, in 2000, was after he rode MARTA, the subway in Atlanta, on a business trip. His coworkers laughed at him for having never taken Metro before, so this was his way of shutting them up.

After I heard about the Metro collision yesterday afternoon on the Red Line at Fort Totten, I imagined what could have happen had my father taken the train to work today. But the train was going into the city; I don't know where that would have put him while going out.

My condolences go out to the families of those who lost loved ones in the accident. The scariest thing, I think, is saying goodbye to someone in the morning and not knowing that it's the last time you'll ever see them.
at 9:16 AM