what's up the pike: red, door and store all over 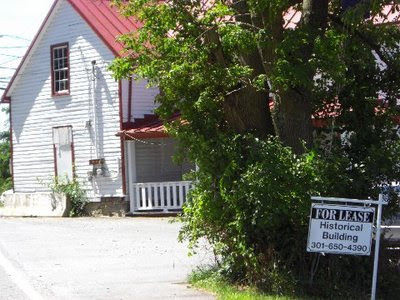 The ca. 18th-century Red Door Store in Sandy Spring is up for lease. Photo courtesy of Cyndy.

- Have you always wanted to open a store in a historic building? Built in the "late 18th or early 19th century," The Red Door Country Store at Norwood and Layhill roads in Sandy Spring is up for lease. The store was home to a beer, wine and deli before closing two years ago. The Parks Department, which owns the historically-designated property, is offering a twenty-year lease to potential tenants who'll restore and occupy the building for "low to no rent." If you're interested, contact the Parks Department before August 31. [Thanks to Cyndy from Photo-Cyn-Thesis for the heads-up.]

- Speaking of closed stores: A "ghost town"? Cool your jets, Downtown Silver Spring bloggers. If you're old enough to remember when Downtown really was a ghost town, you shouldn't be crying over a couple of closed stores. As one of only a handful of stores nationwide, Marimekko's Silver Spring branch was a true gem, but its loss doesn't spell the end for the business district's viability. A shopping center that's a third empty across the street from another shopping center being built, on the other hand, is kind of scary.

- Did you go to last night's Silver Spring library charrette? What did you think? Leave a comment or shoot an email to justupthepike at gmail dot com and I'll publish it here.

- Reader Frank sent me this story about a Silver Spring resident who was refused a ride home by a District cabbie - and the Taxicab Commission didn't believe her. "Would be interesting to see how many people in Silver Spring have had this problem," Frank writes. Has this happened to you? Do you find a cabbie who also lives in Silver Spring? Do you have him drop you off at Eastern Avenue? Or do you make sure to leave him a big fat tip?

- The Gandhi Brigade, a nonprofit group that encourages youth activism through media, is holding its second-annual "Express Yourself" film festival tomorrow. Selected pieces from the "over 120 minutes of youth-produced video" that'll be presented at the festival will be aired on the county's public-access television network. The event is from 1-5pm in the Gandhi Brigade's space on the fourth floor of City Place Mall.
at 8:51 AM

Clearly you haven't been reading my blog. Don't be ashamed, nobody does. Still, you missed

Commercial real-estate vacancy rates are up 20 percent, from about 8.5 to above 10 percent in the District, and in Maryland -- already not doing too well -- it's nearly 14 percent. There's simply no need to build any more.

A recent visit to the "Rio" in Gaithersburg got me there an hour early for the premier of "Star Trek", and I spent some time wandering around looking at the stores... and there weren't all that many stores, and a lot of them had "going out of business sale" signs in the window. That was a few months ago, and I imagine that those storefronts are all empty now. And they say that when you have a retail/office complex like that, if you have any empty spaces on the street level, you probably have almost nothing but vacant office space above.

The thing is, it could be worse, and elsewhere, it is. "Chicago Business" shows nearly 25-percent vacancy in Chicago's suburban commercial real-estate market.

Remember, folks, a lot of entities such as pension funds -- especially those serving public-servants such as educators, fire/rescue, and law-enforcement personnel -- have very major proportions of their assets on the books as ownership in full or in part of large commercial real-estate sites. For example, TIAA/CREF -- which serves the professional academic community -- is one such outfit, and I've been watching that part of my retirement savings take a major hit as of 6 months ago. [ ... ]

See the article for more, if you dare. If you are subject to fits of depression you'll probably want to have your friends remove all sharp objects before you do, though. And don't forget to see the Calculated Risk blog, though I have to issue another "hide sharp objects" warning to the readers.

The rising tide of “short sales” by troubled home owners facing foreclosure is prompting lenders to become more aggressive in their attempts to pursue former homeowners for their loan losses in a short sale. In a short sale, a house is sold, with a lender’s approval, for an amount that won’t pay off the mortgages on the property.

Often, the troubled home owner assumes the loss will be eaten by the lender. But Bank of America and Chase have quietly added language in their short-sale agreements that require the borrower to sign a promissory note for the shortfall. [...]

Not only losing their butts in short-sales of real-estate, but they owe piles of money afterwards!

Can it be long before we see the resurrection of the institution of the Poor-House?

Campaign season 2010 is going to be sooooo entertaining to watch. I'll be on the sidelines, not a candidate, so I will feel utterly free to heckle.

"Everything You Think You Know Is Wrong.

Banks have yanked back on lending to developers of shopping malls, apartment complexes, hotels and office parks. ... The U.S. commercial real estate market is roughly $6.7 trillion in size and is underpinned by about $3.5 trillion of debt.

Heh. And here we thought that Iceland represented Epic Fail.

As to Iceland, "just because you're first doesn't mean you're biggest."

Not to mention that the US office vacancy rate hits 16 percent in Q2. Fun quote?

"It's bad. It's decaying and getting worse. Given the depth and magnitude of the recession, you can argue that we are facing a storm of epic proportions and we're only at the beginning."


And good luck selling this, Deutsche Bank, 50-percent vacancy rate and all:

Deutsche Bank is selling the last of seven buildings it seized from developer Harry Macklowe. He paid $1.74 billion for the 1.75 million square-foot property in February 2007, according to Real Capital Analytics Inc. data. Manhattan office building prices have dropped 30 percent to 50 percent since the peak in 2007, according to Woody Heller, head of the capital transactions group at Studley, a New York-based brokerage. Heller wasn’t involved in the transaction.

...The 47-story building will have more than 700,000 square- feet of vacant space with the expected departure of advertising and public relations firm Ogilvy & Mather.

More like 65% off, but all that vacant space was probably a huge factor.