what's up the pike: our 15 minutes of fame 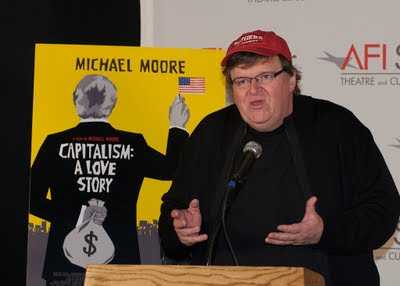 - Master photographer/friend of JUTP Chip Py snapped this photo of filmmaker Michael Moore as he premiered his new film Capitalism: A Love Story at the AFI Silver Theatre Monday night. Free tickets for the show handed out that afternoon were gone in seventeen minutes, according to the Silver Spring Penguin. Meanwhile, commenters on Jerry McCoy's blog say that Moore handed out signs saying "Capitalism Did This" for fans to display, which appeared across the CBD. One hangs from chain-link fences on Thayer Avenue encircling the future Studio Plaza development.

Will I see his movie? I fondly remember seeing Fahrenheit 9/11 in a packed theatre at the AFI on the 4th of July five years ago, thinking "Wow! Only in Silver Spring can I sit in a room with four hundred liberals and scream at the president!" Then a few days later I saw it again on a bootleg in my old barber shop at Georgia and 13th. I guess that means I'll probably end up seeing it regardless of what I do.

- Howard County Executive Ken Ulman tells the Baltimore Sun that he'd like to widen Route 29 Further Up The Pike in Columbia if the money was there. While that may sound like relief to those bearing "Choose Civility" bumper stickers as they crawl through MoCo at rush hour, I'm not sure how it'll improve traffic conditions down here. Like the road widening, making major transit improvements Howard might be cost-prohibitive, but Howard could do better in the meantime to run more commuter buses between Columbia and Silver Spring.

- Saturday's another big day in Downtown Silver Spring. In the morning, head over to Fenton Street Market between 9am and 2pm and check out wares from your neighbors' studios and attics alike. It'll be the last one on the parking lot at Fenton and Silver Spring Avenue before condos are built there, or next spring, whichever comes first.

- (And in between, join myself and Buy Local Silver Spring for a walking tour of small businesses, leaving the Fenton Street Market at 2pm!)

- After that, it's the third-annual South Silver Spring Block Party, held on several blocks around the intersection of Newell and Kennett streets. There will be live music, over fifty local vendors, an "international food court," not to mention a beer garden. The party starts at 1pm and officially ends at 6 but, as all Silver Spring get-togethers tend to, it'll probably devolve into a kegger (sans keg) and last much longer.
at 9:15 AM

Your link in this post to SS Penguin takes me to Thayer Ave blog.

One HILARIOUS tidbit from Mon night was that a certain elected state official (cough *Jamie Raskin*) got chastised by security for being on his PDA during the movie. Recording devices were a BIG no-no that night.

BTW AFI Silver theater workers are trying to unionize and one said so loud & proud at the screening to much applause from the audience. I don't really "get" why -- AFI is a membership organization. Is it just the theater employees (ticket sellers/ushers/projectionists/popcorn slingers) or the whole staff? If someone is inside AFI, please explain.