"The Commuter" is a bronze statue of a briefcase-wielding man on roller skates, made by Marcia Billig and placed outside the Wheaton Metro station's Veirs Mill Road entrance in 1994. Apparently, someone saw the trash can placed in front of "The Commuter" many years later and decided to do something about it.

Photographer and friend of JUTP Chip Py sent us this photo of the vandalized statue, suggesting it might be a commentary about our shitty economy: 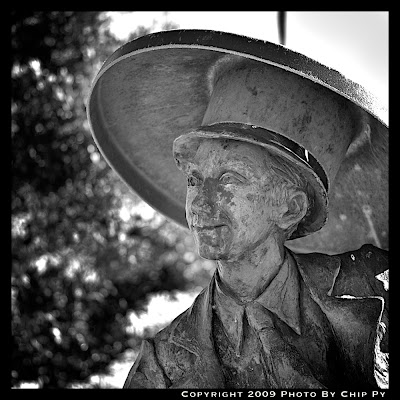 Someone has placed a lid from a nearby garbage can onto the head of Marcia Billig's Wheaton Commuter Statue that has greeted commuters since the station opened in 1990. I wonder if this is just a sophomoric prank or if it symbolizes the anxiety that many commuters feel these days. Commuting on the aging Metro to their jobs that they are glad to have but are uncertain that they will be there in the future, sharing a common workplace anxiety that their hope and dreams will be "trashed" in this economy.

Where could "The Commuter" be going with those roller skates? He sure as hell isn't taking the Red Line to hit up a skatepark in Downtown Silver Spring.
at 9:45 AM