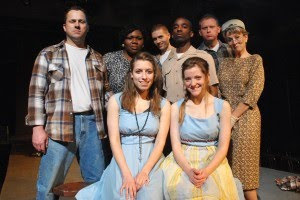 Kensington Arts Theatre closes out its 2009-2010 season on a somewhat somber note with Violet, a musical set in the Civil Rights-era South. Despite grappling with issues of race, identity, and faith, KAT's cast rises to the challenge.

In Violet, the title character (Autumn Seavey) grows up "on the side of a mountain" in rural North Carolina. At thirteen, her face is disfigured by her father in a wood-chopping accident. Now grown, Violet boards a bus to Oklahoma to meet a televangelist she's convinced can heal her scars.

Along the way, she meets soldiers Monty (Eric Minor) and Flick (Darius Epps), who both develop feelings for her. As they travel across the South, Violet falls for womanizing Monty and but ignores Flick, insisting that his black skin makes him less attractive than she is.

The musical jumps between Violet's current journey and her pained childhood, which often play out in the same scene. In "The Luck of the Draw," Violet, Monty and Flick play poker while downstage Young Violet (Allie Bannigan) learns the game from her father (Patrick McMahan).

KAT's production relies on a minimal but flexible set, using movable benches and other pieces to re-create everything from a Greyhound bus to a Memphis roadhouse. Having furniture on wheels makes for some exciting choreography, as in opening song "On My Way," in which Violet and her fellow passengers dance with bus benches.

As always, the vocals are crisp and clear. I especially enjoyed the harmonies between Violet and her thirteen-year-old self, who appear frequently together, a metaphor for Violet's inability to heal emotionally from her accident. And again, I'm left wanting to hear more of ensemble member Felicia Akunwafor, whose powerful voice I was first introduced to in KAT's Rent.

But even the ensemble gets equal billing in Violet, where six of the nine cast members play multiple parts, sometimes changing costumes and characters within the same scene. Liz Weber was especially hilarious as a sanctimonious old lady and, later on, as a loud bus driver.

Like many of KAT's productions, Violet deals with many adult themes and there is some brief sexual activity and partial nudity. Of course, that certainly didn't stop the group of high-school girls sitting in front of me, and it shouldn't stop you from making the trip to Kensington to support your community theatre.

Violet continues its four-week run this Friday at 8pm, with additional performances on May 8, 14, 15, 21 and 22 at 8pm and on May 9 and 16 at 3pm. As always, you can find them in the Kensington Town Hall, located at 3710 Mitchell Street in Kensington. For more info and to buy tickets, check out katonline.org.

Cast photo by Ernie Achenbach for KAT.
at 9:20 AM