what's up the pike: zen-like forgiveness 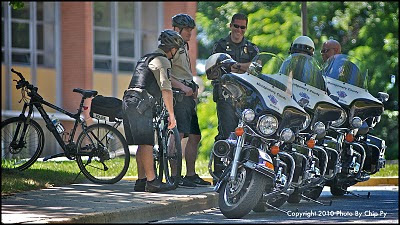 Bicycle-mounted cops may be getting exercise, but they're not immune to a little jealousy of their motorized brethren. Friend of JUTP and awesome photographer Chip Py shot this hilarious photo of cops waiting outside President Obama's health care-themed town hall meeting in Wheaton yesterday.

If you're counting, that's the third time the President or First Lady have appeared in East County this year, after a visit to Veirs Mill Elementary School in October and another, more controversial trip to New Hampshire Estates Elementary School last month.

- The Takoma Park/Silver Spring/Kensington/whatever Voice seems to like Fire Station 1, the new restaurant in the old firehouse at Georgia and Silver Spring avenues, while SoCo Eats and most of the commenters on Thayer Avenue (Why don't y'all come over here?) are not impressed at all.

A few months ago, I criticized fellow blogger Nacho Salsa for his mean-spirited review of 8407, but upon reading his latest thoughts on Fire Station 1, I think I've come around. Or gotten the joke. (At least, I think it's a joke.) While he praises the restaurant's staff ("clearly, run by pros"), Nacho's still not impressed and chastises anyone willing to settle for less in the "new" downtown Silver Spring:

"There’s a movement in Silver Spring that preaches a Zen-like forgiveness for places like [Fire Station 1]. Renewal, revitalization, at any cost. But, here’s the thing – Silver Spring is vital. It is alive. A few feet from FS1 is Pacci’s, with amazing pizza and equally comfy outdoor seating. A block south is Jackie's, Sidebar, and Lotus Café. Good food, good drinks. North and you get the best beer and bourbon bar in the state at Quarry House. Go across the street and you get the craziest theme pub I’ve ever seen in Piratz Tavern. Zig-zag across the street again and you get the chains. Faux Irish, yuppieville fucktown, sports hell, and sad southwestern. Wander another few blocks and you get crazy Greeks, or drinks served in coconut shells.

We have the vitality. We have the diversity. And we have gifted restaurateurs. So much so that these middling places are a weeping wound in our sides. A step backwards. Too simple. Too boring."

- The snowball stand outside Kendall's Hardware on Route 108 in Clarksville is open!

- Matt at Track Twenty-Nine calls out Park Police for blocking trails in Sligo Creek Park with trail warning signs.
at 9:30 AM

I think that little girl was just plain awesome. She had a good question and asked it. It's too easy to have superficial conversations about immigrants unless you remember that the people in question are real human beings.

Thanks for the link, Dan. The sign has been moved now, but it shouldn't have been put there in the first place.

We enjoyed Hollywood East noodles at the recent Taste of Wheaton. HE got a glowing writeup in as DC paper.
http://andrew.wandernote.com/2010/05/tasty-wheaton/

We also went to HE itself for dim sum over the weekend. Well worth it.

Hi! I apparently started the mess over on Thayer Ave, bit I didn't mean to!