I came home last weekend and saw this at the construction site for the new Silver Spring Library. Tsk tsk.

- In case you missed it over Thanksgiving weekend (or your turkey/travel hangover): we looked at how a lack of student housing encourages underage drinking in College Park, discovered that Veterans Plaza has the same furniture as a famous new urban park, and reluctantly visited the new Burtonsville Giant.

- Colesville Patch reports that a newly-vacant T-Mobile store in the Colesville Center shopping center will stay empty for a while. Oh, and now former State Senator Rona Kramer is the president of her family's business, Kramer Enterprises, which owns the shopping center. (Brother and state delegate Ben Kramer, meanwhile, developed and owns shopping centers in Norbeck and Cloverly).

- Developer B.F. Saul has posted their re-cap of meetings on the future of downtown Wheaton, which they've basically been given the keys to redevelop, says Wheaton Calling, who worries they aren't taking everyone's concerns into consideration.

- I can't get over this photo of the "bee guy" from the Silver Spring Thanksgiving Parade last week. With a satisfied grin, matching boots, and tray of Starbucks coffee, he makes my day every time I click on this picture. 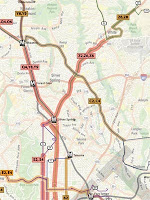 - Metro is working on a map of high-frequency buses that come at least four an hour (which should mean every fifteen minutes, but that may or may not be the case). Note that Silver Spring and East County are relatively well-served by frequent bus routes compared to the rest of the Maryland and Virginia suburbs, with buses running along Georgia Avenue, University Boulevard, Veirs Mill Road and Colesville Road as far north as White Oak. If you're curious what to think about the map, or already know what to think and have your two cents to give, drop them at Greater Greater Washington or Human Transit, probably the best professional transit blog being written right now.
at 9:25 AM

We had a little glitch with our order at Asian Bistro last night, and they gave us 2 mugs, with the website www.asianbistrosilversprings.com ... oops!

Come to think of it, I guess they're trying to get rid of those mugs.