woodside skate spot NOT closing, gets progress report in july

Rumors spread on Facebook earlier this week that the Woodside Park skate spot, which opened last August, would be closing soon. I e-mailed Ellen Masciocchi, planner for the Montgomery County Parks Department who's been working on the mini-skatepark since the beginning, to find out if it was true. 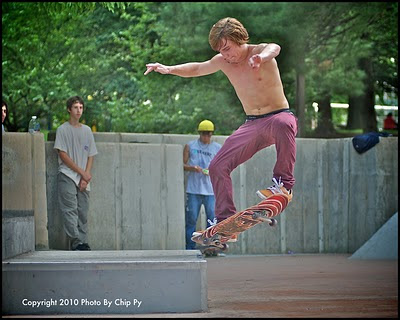 "You may be hearing that we will reevaluate the skatespot in July of
this year with the community," she wrote back. "There are no plans to close it at this time."

The skate spot, which uses modular concrete pieces made by California-based skatepark builder Spohn Ranch, was always planned to be a temporary facility. Woodside Park, which is nearly forty years old, will be renovated in the near future; the Parks Department is currently working on a design that they'll present to the community this summer. They'll also collect input on the skate spot to see whether it should become a permanent part of the park. Since it opened, neighbors expressed concerns about fights that broke out there, while local skaters complained it was too small for their needs.
at 9:21 AM