It's old news that the arts - whether in the form of a dance studio, a painter's workshop or a punk house - usually move to crumbling urban neighborhoods where lots of cheap, unused space is available. But even in D.C.'s darkest days, these kinds of spaces - which usually means old warehouses - were often scarce or prohibitively expensive. As a result, the suburbs became the place where much of D.C.'s art gets made. 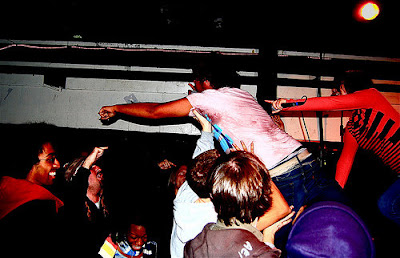 The Lost Tourists (from Frederick) play at Scumbag Nation in Colesville. I'm not sure who took this photo.

This is from an old-ish (December 2009) City Paper article, "The Orange Line Revolution," about punk houses in Arlington:


Every burgeoning arts scene needs a safe, cheap, and relatively carefree place in which to set up shop. Baltimore had its bottle cap factories. Brooklyn had its loft spaces. D.C. had the close-in ’burbs.

The ’80s and ’90s were a golden era for the D.C. music and arts community. But many of those artists lived in places like Arlington and Silver Spring. Because they were cheaper. Because you were less likely to get your face punched in. Because you could play loud music all night.

(It's funny because, ten years before, the City Paper still bought into the idea of Montgomery County as "a wasteland inside a cul-de-sac of a hellhole of suburban ennui." The sooner that kind of smug ignorance dies, the better.)

Anyway: I wasn't aware of the punk houses in Arlington, but there were and still are several in Silver Spring, including the Death Star at Cedar Street and Ellsworth Drive, which closed in 2006 after the property's owner wanted to converted it into offices, which never happened. Shortly after, the Corpse Fortress opened a few blocks away at Philadelphia Avenue and Fenton Street. And in Colesville, there's Scumbag Nation, located in a sprawling ranch house on a big, wooded property off of New Hampshire Avenue.

These houses are all quite old (The Death Star and Corpse Fortress probably date to the 1920s, while Scumbag Nation was probably built in the 1960s) and in somewhat marginal locations. (It wasn't that long ago that the Death Star was in a marginal area as well, but having a Whole Foods move in across the street can do that to you.) They've become obsolete as newer homes and newer neighborhoods were built farther out, and suffered from the same cycle of disinvestment that hurt inner-city areas. As a result, they became cheap and accessible to a few kids wanting to put on a show.

On the outside - and, I guess, on the inside too - a punk house can look dirty, smell awful and sound terrible. (The last one depends on your musical tastes.) But they play many important roles. They give kids something to do, and in the D.C. area where straight-edge started, it's often something without drugs or alcohol. They help form communities in places where one may not exist. (It's both an intensely local community, based around a house, a school or a neighborhood, and a regional one - bands from Frederick came to play in Silver Spring, and vice-versa.) And they're just one of the venues where a local arts scene is built. The Death Star was a punk house in downtown Silver Spring before closing in 2006.

Note that some of the nation's largest suburban music scenes, in Orange County, California, Northern New Jersey, and Long Island, are outside of cities that are ridiculously expensive to live in. Similarly, we have (or had?) a substantial music scene in suburban Washington. And we'll continue to as long as D.C. remains expensive.

Last week, the Post talked about performing arts centers locating outside of the city, like Strathmore Hall in North Bethesda. To me, that's not too different from having punk houses in Arlington. People like to make art or music wherever they live, and when nine-tenths of Greater Washington's six million residents live outside of Washington, the city can't have them all.

This isn't a bad thing. While we should work to create more affordable housing in the District so that artists can continue to live there, it's good to nurture the creation of culture in the suburbs as well. In doing so, we'll create stronger communities with a greater sense of place, and better music to boot.
at 9:12 AM

is it just me, or has the maryland punk/ska scene rolled over and died since i got out of high school in 03? speaking of that....how can i get my band on one of these bills? is scumbag nation still doing shows?