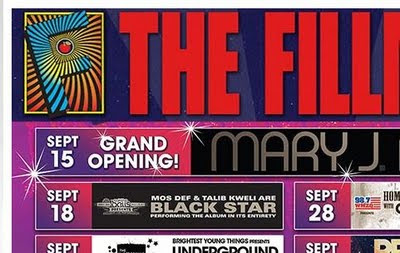 Check out the Fillmore Silver Spring's schedule at FillmoreSilverSpring.com.

I notice that, for the most part, the first shows at the Fillmore are decidedly adult-oriented, perhaps allaying (unfounded) concerns raised by residents of the surrounding neighborhoods about noise and crime. I imagine there is a market for acts with a younger audience (like Bring Me The Horizon) in Silver Spring, especially as parents might be more comfortable with their kids coming to a show here rather than going into D.C. or Baltimore. I'm hopeful that, no matter who plays at the Fillmore, the venue will bring customers to surrounding business, furthering the revitalization of downtown Silver Spring.

Yet I can't help but ask: where on the schedule is the most adult of adult contemporary artists, one Michael Bolton? We know County Executive Ike Leggett likes the singer, and he's basically paying for this venue. If I were Leggett, I'd throw all the subsidies I can find at Live Nation until Michael Bolton does a three-night run at the Fillmore.
at 10:36 AM

Middle-aged folks like me are going to be all over the place. There goes my property value.

Oh, great, Dan, that's just the encouragement Ike needs. Next, why don't you suggest that Donald Trump engage in some self-promotion? :>