blast from the past: before it was "silver sprUng" 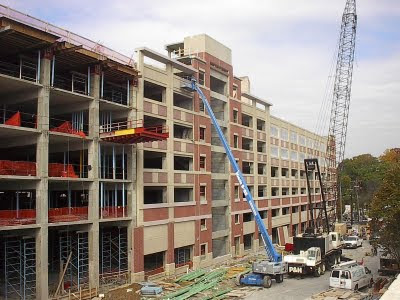 The Town Square Garage on Ellsworth Drive under construction in 2003. Photo courtesy of . . . Montgomery County? I think.

After talk of stores closing and youth curfews and terrorism fears, it's easy to feel down about the current state of downtown Silver Spring, and hard to remember that not long ago things were much, much worse. I forget when I stumbled on this post from Spam-O-Matic, a sort of proto-blog written by Silver Spring resident Andrew Lindemann Malone, about the very first Silverdocs film festival way back in 2003. Well before "Silver SprUng" took hold, visitors flocked downtown to see pro skater Tony Hawk (the subject of a documentary in the festival) perform on a half-pipe in the middle of Georgia Avenue:

As Tony Hawk glided with tricky steps and a total, subconscious awareness of momentum and gravity across the surface of a temporary halfpipe to execute a 540 Ollie two weeks ago, and as a crowd packed tightly into the available space on a closed Georgia Avenue erupted in cheers at the sight, Silver Spring had never seemed so much like a real city . . .

Almost as fun as watching the Hawkites do their thing was just wandering around and watching people wander around. After the concert, the Combo Ocho, which seems to get hired often by Silver Spring to play municipal concerts, was playing a lively set; some people were dancing on the hot blacktop to the salsa. There were food booths set up, with lines befitting a street festival; I've never seen so much interest in Manny & Olga's pizza before in my life.

The Discovery building was open to the public, which mainly meant that we could all see a cool machine full of wacky mechanisms to transport brightly colored rubber balls from…well, somewhere to somewhere; the journey is the destination in these kinds of machines. Various other tents pitched Discovery shows and networks; a small, assured woman from Animal Planet draped a huge snake across her shoulders and answered all questions patiently, and at another tent I entered my sister to win an enormous basket of Trading Spaces promotional crap. Bonhomie ruled; the mood was appropriately festive, on a beautiful day with interesting stuff to see and do and explore, and as diverse a crowd as I've ever seen in any Silver Spring public space was enjoying itself.

Skaters in downtown? A Discovery Building that actually invites the public in? A diverse crowd of people having a fun, incident-free day out? Surely, we can't have fallen that far in just eight years.

In all seriousness, read the rest of Andrew's post. It's interesting that a lot of the concerns he raised then - fears of gentrification, established businesses shutting down, lack of nightlife options - are still things we talk about today. I wonder if we'll still worry about downtown Silver Spring "making it" as a desirable urban neighborhood in eight more years, or if we'll have moved on to new problems.
at 9:00 AM

Oh, remember how BAD that garage was before the renovation? It's not great now, but pre-renovation there was a truly delightful hairpin turn to get on to the interior ramp. Remember also when Thai Derm was there in the base of the garage building?

Hey, thanks for linking to my post! I just saw this. The more things change...

For my part, pretty much all my hopes for Silver Spring have been fulfilled, though. I confess that my priorities eight years ago are a little different than my priorities now.