what's up the pike: thanksgiving?

I know I said I wasn't going to post today (what with the whole being with friends and loved ones thing), but I couldn't resist. Here are a few things I'm thankful for this year:

"Things I'm Thankful For" lists. Our friends at Greater Greater Washington are giving thanks for urban blessings today. I didn't add any because I don't currently live in the D.C. area, but I guess I'm thankful for being able to get out of Philadelphia for four days.

And over at Colesville Patch, friend of JUTP Whitney Teal has a list of things she's thankful for in East County (and one of them is this blog!) Thanks, Whitney. I met her two years ago before she joined Patch, and of all the umpteen local Patches I've enjoyed hers the most. (Not that the Silver Spring, Wheaton and Takoma Park Patches are any slouches, but I recognize the challenge of writing about the "Upper East Side" of MoCo.)

The Silver Spring Historical Society, whose Jerry McCoy sent JUTP this ad from Lee's Tea Garden, the first Chinese restaurant to open in MoCo way back in 1936: 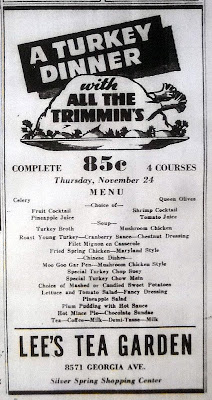 This Thanksgiving advertisement was published in the November 18, 1938 "Maryland News." L. S. Ling opened Lee's Tea Garden that year in the equally new Silver Spring Shopping Center (the restaurant's space is today occupied by Panera Bread's kitchen). The oldest known Chinese restaurant serving Cantonese dishes in Montgomery County, Lee's was renamed Shanghai when it reopened in 1950 at 1201 Fidler Lane. This beloved restaurant remained in operation for half a century, closing in 2000. Even in 1938, 85c was a good price. Adjusted for inflation, this is equivalent to $13.55 today. Try finding a four course meal for that.

My aunt and cousin's restaurant, Li'l GT Cafe in Petworth, where I'll be spending part of my Thanksgiving today . . .

and my boyfriend, Professor Vegetable, who no doubt will be trying to feed me Tofurkey later on.

Yet, I didn't feed you any tofurkey at all!