One week after Steve Silverman's bus tour, Purple Line supporters held a rally in Langley Park yesterday - and people actually showed up, earning coverage from both the Post and the Gazette . And despite all of his previous belly-aching, Flanagan wants to take all the Purple Line cred for himself:

Maryland Transportation Secretary Robert L. Flanagan said that O'Malley has only recently made the Purple Line, also known as the Bi-County Transitway, an important piece of his transportation plan.

"We're happy to see that he's finally figured out where the Bi-County Transitway is," Flanagan said during an interview. 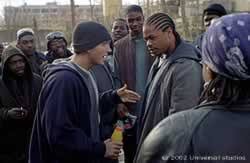 Oh, dear. O'Malley better step up . . . we're gonna have a good old-fashioned Public Transit Battle (at left; let's say Eminem is O'Malley and the other guy is . . . Michael Steele?) But Battle or no, Langley Park commuters won't be seeing any relief - even in the short run - as the owner of the Langley Park Shopping Center (pictured above with day laborers) is refusing to sell part of his property for a Takoma/Langley Crossroads transit center that would eventually be on the Purple Line.

And somewhere (possibly in Chevy Chase, teeing off at Columbia Country Club as the valet parks her Mercedes) someone is laughing heartily, confident that the Limousine Liberals are winning . . .
at 10:37 AM

I'm waiting to see the Purple Line opponents launch a campaign to "save our historic Taco Bell".

I don't think the residents on Thayer and Sligo Avenue welcome the Purple Line, and the Friends of Sligo Creek should think twice about endorsing the Purple Line.