And what better way to ring in the hundredth post than with these spectacular election day results! It feels like Christmas!

While the election has not been settled nationally (thanks a lot, Virginia and Montana), here in Maryland, the people have spoken, and Bob Ehrlich and Michael Steele are back out on the street.

Ehrlich has done enough damage over the past four years. He dismantled Glendening's Office of Smart Growth; he ignored our state's transportation priorities and forced the approval of a two-billion-dollar highway; and he disrespected the people of a state whose beliefs are not in line with his. 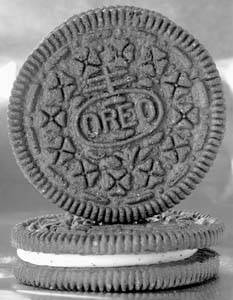 Steele didn't do anything in office, but this election season he disrespected minorities, trying to swindle them into voting for him and assuming a cute puppy could cause us to ignore his conservative ideology and connections to President Bush. This man is little more than a false front, and now everyone can see it.

It's time for Maryland to pick up where it left off with Glendening and continue its tradition of progressive government. We've strayed too far from our goals over the past four years.
at 11:37 AM

You're right. It is like Christmas morning. We've had a BAD four years.

You call yourself progressive, yet you choose to show a picture of an Oreo cookie.... a not-so-thinly veiled allusion to Steele?

You should be ashamed.

have you forgotten that Dan is black?

" Anonymous said...have you forgotten that Dan is black?"

Oh, that's right! I forgot! It's IMPOSSIBLE for blacks to be racist!

What was I thinking?

That's strictly for the white folks....

Speaking of Steele, he's been asked to become chairman of the GOP.

Sligo said...
Speaking of Steele, he's been asked to become chairman of the GOP.

A conservative mixed state that leans towards Republican Virginia elected a Black Governor in 1989 but yet a Majority white Democrat state of Maryland has NEVER supported/elected a Black Democrat for Governor, Senate, etc.

Has there ever been a decent black candidate for governor or senator? Me thinks that's the first step in having one elected. We almost had a black AG (Stu Simms),until his people ran his campaign into the ground. O well...