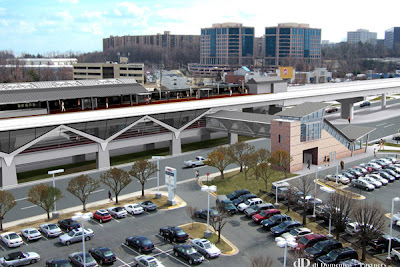 "We're in the age of Metro now. I think people get it . . . you don't really have to sell people on the Metro. You have to find the funding." - Congressman Al Wynn (D-Dist. 4), in a JUTP interview last June

The Bush administration has put the kibosh on Metro's Silver Line - which, as you may know, would go out to Tysons Corner, Dulles Airport and beyond. Citing the project's cost-effectiveness and Metro's currently deteriorating service, the Federal Transit Administration refused Virginia's request for $900 million in funding, despite years of planning and cost-trimming to meet their demands.

I am heartbroken. It's like high school all over again - I try to win a girl's heart with flowers, candy and sappy poems only to find out she wasn't really interested, now if not ever. Secretary of Transportation Mary Peters, you are a maneater.

So far, the Purple Line has had to battle with an exclusive country club, a state university, and a gauntlet of civic associations from Bethesda to Takoma Park. If a line connecting the D.C. region to its second-largest job center and its major international airport can't pass muster with The Feds . . . will the Purple Line do any better when it goes up for review in a couple of years?

Maybe. At $1.6 billion, the Purple Line's price tag is roughly a third of the Silver Line's estimated $5 billion cost. With as many as 47,000 expected daily riders (warning! PDF file) by 2035 - compared to 91,200 daily riders on the Silver by 2025 - the Purple Line has a lower cost-per-rider, making it a stronger investment for the perenially cash-strapped FTA.

Peters, who with FTA chief James Simpson holds the purse-strings, recently said she believes the federal government shouldn't be paying for highways and transit - if only because some of the things they spend money on, like bike trails, "really are not transportation" to her. Perhaps major transit projects like the Silver Line and Purple Line should be designed and built by the private sector if our national transportation policy is being shaped by somebody so bull-headed.
at 12:01 AM

First, the Bush administration is notoriously hostile to transit. For example, it has tried to eliminate both operating and capital funding for Amtrak several times. (Senator McCain, the biggest opponent of Amtrak in Congress, would no doubt propose the same were he elected President.) Perhaps a Democratic administration would behave differently. The challenge for Silver Line supporters is to keep the project alive in some form until a new administration takes office.

As for the Purple Line, as Dan says, it has a different cost structure because it is light rail. The Silver Line would be a full Metro branch. Criticizing WMATA's problems, as the Bush officials do, may not be as directly applicable to the Purple Line.

And the Silver Line has been victimized by different sets of supporters pushing different options, primarily tunnel vs. elevated. The Purple Line definitely has alignment disputes. But it's likely that when MTA conclusively decides on one alignment, the Purple Line supporters will coalesce around it. If they don't, then the project really could run into similar problems to what the Silver Line experienced.

They SHOULD get rid of Amtrak, provided it was replaced by an efficiently-run private company (or companies). It's absurd that they are obligated to run cross-country trains which are subsidized by overpriced $300 train fares from DC to New York. In Europe you can take city-to-city trains for a fraction of that price. (And they are faster and nicer.) In America train speeds aren't really much different than they were 80 years ago. If I can take a bus to New York for $25, why does it cost me 10 times that to take a train??

extending Metro to Dulles is a flawed idea. Too long and too expensive. They should instead build BRT to dulles like the original plan with stations in the median just like the Metro plan. Later on they could convert to Metro. Tysons is also flawed. They want Metro just so they can approve more pedestrian unfriendly buildings to create a traffic nightmare for the Western Beltway. I'm glad NoVa got Screwed by the Feds. they deserve it. The Purple Line will be immune to the arguments against the Dulles line because it will be light rail, have a higher cost effectiveness, and will be run by Maryland-financed MTA, not cash-strapped WMATA. They should immediately divert the Dulles rail money to the Purple Line and CCT, so that other regions do not obtain that money.

The Purple Line should be buried! And I don't mean as in run it through a tunnel, I mean pull the plug on it.

The Purple Line will have next to nil positive impact on our region's congestion, the ridership has been overstated and the costs understated. The only people who will benefit are developers who will get increased density zoning, consultant and engineering firms, and politicians who pander and claim they are improving transportation.

The taxpayers will be screwed with higher support for a system that will likely only recover 15 cents on the dollar for operations and maintenance costs.

So much for Bush trying to say he believes we should look for fuel alternatives and cut down on our oil consumption - what a lying ass.
Whoever the new admin is (can't be TOO soon for me) - we are bound to see a change and a return to common-sense planning that will leave a living legacy for the next generations.

The idea of the Purple Line will look pretty good in another 10 years, when the only people who can afford gas will be politicians and gangster rappers.