what's up the pike: not quite east county edition 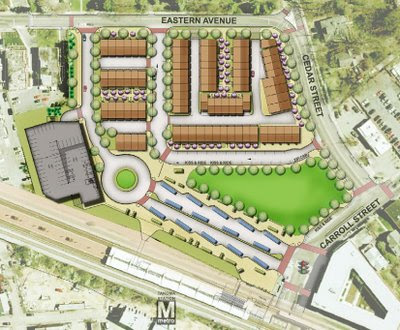 Takoma residents say this proposed development at the Takoma Metro will hurt transit use.

A controversial development at the Takoma Metro will go before the Takoma Park City Council tonight. Local builder EYA has been trying for eight years to build townhouses on Metro-owned land adjacent to the station, which sits on the Maryland/Washington, D.C. boundary. Residents in both jurisdictions have been concerned about the plan, saying that it "fails to enhance transit use and is incompatible with the needs of the greater DC and MD Takoma community." The meeting's tonight at 8pm at the Takoma Park City Hall. For more information, check out the city's website.

East County commuters using the Green Line might see a new travel option with the Brown Line (warning! PDF), a proposed service between Greenbelt and Franconia-Springfield using the existing Blue, Yellow and Green lines that would relieve congestion on the Orange and Blue lines in Northern Virginia. The Brown Line will be presented to Metro's Rider Advisory Committee on Wednesday. More details at Greater Greater Washington.

Finally, county politics and wasting time at work come together with the new Montgomery County YouTube channel, featuring all of MoCo's biggest hits. Among the videos featured are a two part series on the Fillmore, but the most-watched video so far, with thirty views is the most recent "County Report." With MoCoYouTube, you can bet these clips are definitely not NSFW.
at 10:42 AM