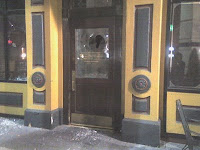 UPDATE: As of Saturday night, the broken windows at Ruby Tuesday have all been boarded up.

A middle-aged woman, whom I assumed was mentally unstable, vandalized City Place Mall yesterday evening, systematically breaking each window of the shuttered Ruby Tuesday restaurant with a baseball bat as she carried a bag of groceries in the other hand.

I'm not kidding! I drove to Bethesda with a friend last night to see Slumdog Millionaire, only to find that all showings at the Landmark Bethesda Row Cinema were sold out - as they have been each Friday for the past two weeks - so we returned to Silver Spring to catch the 9:50 showing at the AFI. When I rounded that corner at Colesville and Fenton and heard glass breaking, I thought the worst. Worse than when I got circled by a group of kids two years ago in the same damn spot.

She was white, middle-aged, wearing a sweater, and she did not hesitate as she swung the bat into each pane of glass in each window up Colesville and around the corner, where she jumped a gate into the patio in order to knock out the windows there. A little crowd of spectators formed behind the bus stop - out of sight in case she decided to turn her weapon on us - too shaken to call police. A couple of us did and waited impatiently for them to arrive.

"What happened?" said every astonished passer-by, careful to avoid the shattered pieces on the ground. "A woman was breaking windows with a baseball bat," I said. "And y'all are out here takin' pictures?" One girl asks. "Well, I did dial the police," I reply.

It must've taken five or ten minutes for the cops to come, and when they do, the flashing lights draw people out into Fenton Street - from where, I don't know - to watch. I wasn't there to see the woman retrieved and taken away, for fellow witnesses to identify her, and so on. But later I pulled up some old stories about City Place Mall. The developer called it a "better mousetrap" for shoppers otherwise headed to Bethesda; when it opened in 1992 (the day before my fourth birthday) traffic backed up Colesville Road from the Beltway; two years later, the same developer pleaded for help from the County, saying they needed to "clean up the area adjacent" to the mall.

And we cleaned it up well, but I still had a teacher in high school - one of my favorite teachers, no less - who said she'd tried to go to that Ruby Tuesday once but they wouldn't serve her because she was white. She would refer to it as being in a "black district," knowing all too well that if she'd said "Downtown Silver Spring," there would've been trouble. I wonder if they hadn't served the window-breaker as well, and a few months after the fact, she'd returned with a vengeance. 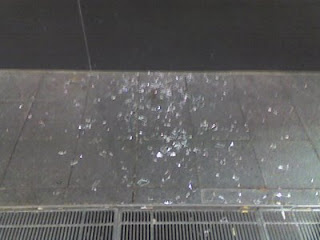 Broken glass on the sidewalks of Colesville Road. 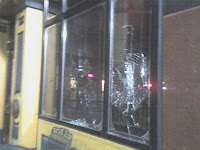 A broken window at the corner. 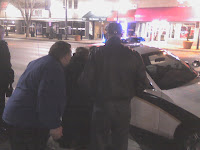 P.S.: Slumdog Millionaire? Best movie I've seen all year, and I've seen at least one other movie this year that I can remember.

Bet those windows stay broken for weeks, maybe months. There's nobody renting the space, and City Place clearly just doesn't care about appearances or anything.

Now add to this unstable person breaking windows, hundreds of liquored up patrons of the soonto be built Nations- and ask yourself- how much more commotion and disruption does Silver Spring need?

Liquored up patrons? Wow, this reminds me, I have yet to make it to the new Cinema N Drafthouse in Wheaton. ;)

Inquiring minds want to know what did the grocery store think about a lady who shops with a baseball bat in one hand.

Well, the lady who shops with a baseball bat is probably a litle batty.
As for the Cinema n Draft-- let us wait and see how long it takes before the neighbor hood complains about drunken moviegoers, or car owners complain about vandalism.


It is just a matter of time