Aside from the approval of slots in Laurel and the possibility that Robin Ficker's anti-property tax amendment might actually pass after thirty years of trying, there's really only one thing that made me so happy last night. I am not the least bit tired of reveling in what we as a country just did, and this morning, I got up early (not as early as I did on Tuesday) to buy a newspaper proclaiming the news. Boy, was I surprised to find that everyone else in the entire world woke up with the same idea. 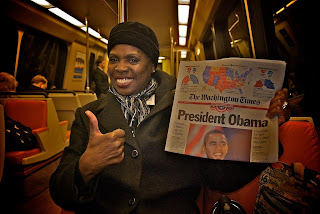 Chip Py, ace photographer and friend of Just Up The Pike, sent us this photo of one lucky woman who actually found a newspaper on this historic day. "I rode home on the train with this woman who stood in line at a Deli for two hours to get this copy of the Washington Times," writes Chip in a e-mail. "All of the Newspapers in town have people handing out and hawking papers to DC Commuters . . . But Today was different."

Regular Just Up The Pike coverage will resume when America has finally comes down from its high and is able to get back to the business of screwing things up.
at 12:03 AM

All that time in line and she didn't even manage to get a real newspaper. I'm surprised the Times didn't call it for McCain.

I totally forgot to get up and get a paper. Then I missed hearing about the commemorative Post until it was too late. grumblegrumblegrumble.