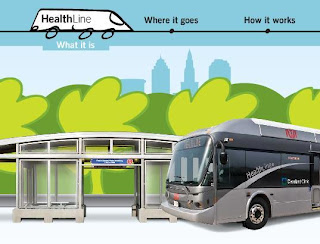 - As the MTA holds public hearings next week for the Purple Line's Alternatives Analysis/Draft Environmental Impact Statement, I'm wondering how they can make an appeal for the transitway in a manner that attracts people who are scared away by hefty reports and jargon. Can the MTA make the bus and train look fast, easy - and, most importantly, sexy? We might want to head up to Cleveland, where their transit agency is aggressively marketing their newest service, a rapid bus route called the HealthLine. The HealthLine's snazzy new website explains what BRT is, how to use the system, and what it can do for Euclid Avenue, which was one of Cleveland's premier shopping streets and is slowly being revitalized.

- Speaking of BRT: Councilmember Marc Elrich has a new proposal for several bus rapid transit lines across Montgomery County, including one up Route 29. At last week's East County Citizens Advisory Board meeting, he presented his plan, which would create a reversible lane for buses in the median of 29 and other roads. Hopefully, we can get a better look at the Councilmember's proposal, which would finally deliver the rapid transit East County's been promised for nearly thirty years.

- As always, check out my weekly column in the Diamondback, U-Md.'s independent student newspaper. This week and next week, I'm writing about - what else? - the Purple Line in preparation for the public hearings, one of which will be held right on campus in College Park. For locations and dates, check out the Purple Line website.

- Speaking of school: it looks like zombies aren't being as well-received on campus as they were in Silver Spring last month. The Humans vs. Zombies game, a weeks-long campaign in which students posing as humans must defend themselves against player-zombies with NERF guns, was halted after a professor thought someone was carrying an actual firearm.
at 12:49 AM

Ah, those suspicions of Campus Games is of longstanding.

Try reading the story that got me run out of UM.

"Loaded" dates back to 1986, so this annoyance of civilians playing at paramilitarism goes back at least 20 years.

Whether or not the Professor rightly mistakes paintball/nerf weapons for real weapons with live ammo, a college campus is not a place where people should have to get used to people out of uniform pouncing out of the bushes (or worse, pouncing around in gilly-suits dressed as bushes) and blasting away at other students.

It's bad enough that UM is mostly known as a riot school.

I had a chance to see/experience Cleveland's "Healthline" rapid bus transit line on Euclid Avenue and was incredibly impressed by it.

Granted it is a less than 7 mile straight-shot route between Public Square and Stokes Windermere, it is certainly LESS damaging to the surrounding communities it passes through than a "light" rail Purple Line would create in downtown Silver Spring.