what's up the pike: kids and chicken 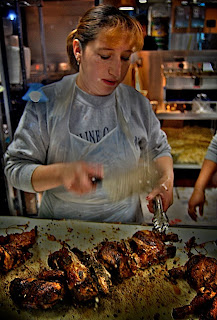 "I am in line at the New Pollo Rico!" text-messaged Chip Py, local amateur photographer and Peruvian chicken enthusiast, to JUTP on Sunday. The popular restaurant's former location in Downtown Wheaton burned down last winter; the year before, it was shut down by INS after many of its employees were discovered to be illegal immigrants. The new El Pollo Rico, which opened fairly recently, is located in the Georgia Crossing shopping center at Georgia and University.

"My favorite money laundering, fugitive harboring, illegal alien employing chicken joint opened back up again this week," wrote Py in an e-mail to us. "And I was proud to stand in line, belly up to the counter and say 'Quatro to Go!'"

- IMPACT Silver Spring, the Gandhi Brigade, and the Silver Spring Citizens Advisory Board are hosting an Action Planning Session this weekend to explore ways to make Silver Spring safer for local youth. In an e-mail to JUTP, community organizer Megan Moriarty says the event was set up in response to a recent streak of youth violence - notably the fatal shooting of a Blair High freshman on a Ride-On bus last month. The meeting will be held from 10am to 12:30pm this Saturday at the Gandhi Brigade's Media Center, located on the fourth floor of City Place Mall.
at 10:56 AM

Which part of Silver Spring are they going to try to make more safe for youth?

Mostly Langley Park, or all of the various and sundry Silver Spring areas?