The following is a guest blog from State Delegate Al Carr (D-Dist. 18), who's introducing a new bill aimed at helping small businesses in Wheaton. For more information and additional photographs, check out Generally Assembled, the blog of the District 18 delegation. 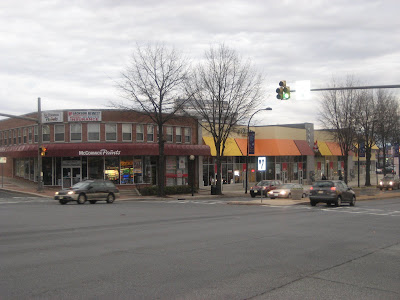 Veteran El Pollo Rico and newcomer DejaBel Cafe are located in the new building on the former Anchor Inn site.

I am a big fan of Wheaton and its commercial district. Like a suburban Adams Morgan, it is an eclectic and diverse collection of restaurants, and businesses of all types and sizes. It is easily accessible via roads, bus and metro. Despite whatever stigmas people have, I think Wheaton has tremendous potential. I was thrilled last year when plans were announced for the opening of the Montgomery Cinema and Drafthouse on the Westfield property.

A core principle of smart growth is to direct resources to places where transportation and infrastructure already exist. The more we can do to encourage investment in our existing communities like Wheaton, the better. Montgomery County and the State of Maryland agree with me. They have given Wheaton special designation as an "Enterprise Zone" to encourage investment through County tax credits. Wheaton's Enterprize Zone status is currently up for renewal. The other Enterprise Zones in Montgomery County are in Silver and Takoma Park.

I am disheartened at the number of vacant storefronts that have popped up lately. 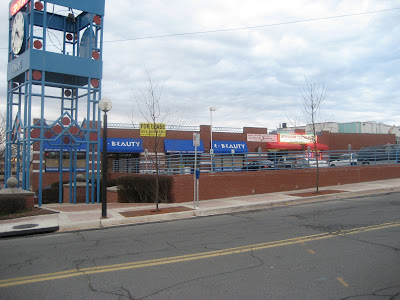 Blockbuster became e-beauty which is now closed. Too bad Sabang (the only area Indonesian restaurant) closed before we had a President that spent some of his early years in Indonesia. 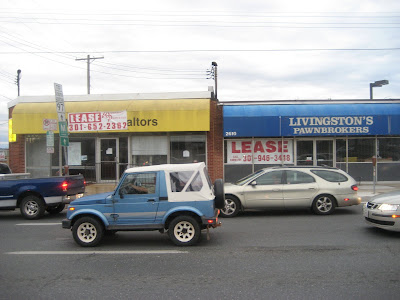 I don't miss the pawn shop!

I had a hard time explaining to my six year old son why the Montgomery Cinema and Drafthouse closed. We had spent a fun afternoon there together having lunch and watching the movie Wall-E. This is a business that chose to locate in Wheaton but had to close their doors after only two months because of an adversarial relationship with their landlord and difficulties with the Montgomery County permitting process.

I have a few insights into what happened. A couple of years ago, I was tasked by my employer with selecting a new flagship retail store location for a high-technology consumer product. After looking at locations throughout the County, we chose Wheaton. Mid-way through the process, I was surprised to learn that we were not eligible for Enterprise Zone tax credits despite bringing hundreds of thousands of dollars to invest in the fit-out of the store (which happened to be located in the same building as the Cinema and Drafthouse). The Drafthouse also received no Enterprise Zone Tax Credits despite the fact that they invested over $1 Million in downtown Wheaton.

Wheaton Mall is owned by Westfield Corporatation - a large multinational developer with U.S. headquarters in California. Westfield has been very aggressive about appealing the assessed value of their property as a way to lower their property tax burden. On the six properties that comprise the mall, Westfield filed appeals 20 times out of 30 annual appeal opportunities over the last five years. This means that they filed appeals not only after the triennial re-assessment, but even in the out years.

The Westfield shopping strip building that housed the Drafthouse has seen several other closures in recent months. Unitech and Checkers closed up shop. Circuit City is having a going out of business sale. The new Office Depot building nearby is also in the process of closing its doors and Bally's is in chapter 11. 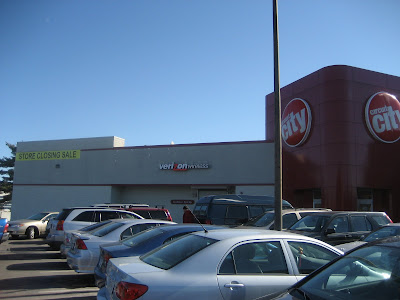 The current Enterprise Zone program, as authorized by the state, provides tax credits to a property owner based on the increase in assessed value. However, many businesses in downtown Wheaton are tenants. A tenant business who wants to invest in Wheaton is ineligible for tax credits unless they can negotiate a pass-through arrangement with their landlord. This can present a conflict of interest - the property owner who is appealing to lower their tax assessment probably does not want to apply for a tax credit program that relies on an increasing assessment.

My bill HB614 addresses this problem. It would enable Counties to expand and improve the Enterprise Zone tax credit program so that tenant businesses could receive tax credits directly. With the economic downturn in full swing, it is more important than ever that we take steps to help our economic development programs work as intended.

HB614 will be heard by the House Ways and Means Committee on the afternoon of March 5th in Annapolis. Senator Madaleno has sponsored the companion bill SB788 in the Senate.
at 12:00 PM

How many of those storefronts going vacant went out of business because they catered almost exclusively to a certain element of the community that has just seen their entire industry -- home construction -- put out of work for the forseeable future?

Don't feel bad, it's not just Wheaton. Aspen Hill is feeling it too.

I have said before that those stores in Wheaton need more housing mixed in so they can have a better mixture of local and regional foot traffic. More urban housing like the building on top of the Metro on Reedie Drive and the townhouses that would have been next to the Giant on University Blvd would go a long way to bolstering the businesses.

The other thing is that some of those businesses cater to a narrow constituency. Dejabel cafe is seeing success because it's something new and different in Wheaton. It's not a takeout eatery. It's an actual Third Place. Eddie (proprietor of Dejabel) has a good idea there.

In order for Wheaton to continue on the path to realizing its potential, it needs to continue to embrace its vibrant walkable urban environment. It already has more transit infrastructure than most of the region outside of the L'Enfant city (oldest part of DC between Florida Ave and the Potomac, and between Rock Creek and the Anacostia) could ever dream of. Having more people living within walking distance of the transit will allow Wheaton to further leverage its competitive advantages to its benefit.

I know that I became a regular at Dejabel because I saw it on my walk home from the Metro after work. There are many thousands like me. With more housing in the downtown, rather than on the periphery, there will be thousands more.

> Cavan wrote, in-part:
> [...]
> In order for Wheaton to continue on the path
> to realizing its potential, it needs to continue to
> embrace its vibrant walkable urban environment. [...]

Cavan, I don't know when I've last seen so many buzzwords strung together, but you're certainly going for a record. Please define "vibrant".

What has Wheaton got going for it? Excellent transportation, major highways either right there or not far away. It's got MetroRail and MetroBus. It's got people who never stop working to try to make it better, though after 40 years of me looking for any signs of improvement, I don't see it getting any better. Every time the County reaches out to try to fix Wheaton, they only stamp out every bit of what makes it really valuable and replace all of that with whatever seems trendy in Urban Planning circles or in the same circles where people use the phrase "socio economic" and are actually taken seriously. What used to make Wheaton a really cool and edgy place rising up past "gritty" and "sketchy" gets stomped out and they try to make it into some sort of Disneyland. All they get when they try to do that is they get a giant Chuck E. Cheese that nobody much wants to visit, except to come and patronize what has managed to survive despite the best efforts of the County.

Ask any of the old-timers if they liked Phantasmagoria. If they were authentically punk-rock they loved it for all of its faults. Now it's the Gilchrest Multicultural Center that serves exactly one culture and has no patrons that aren't bused in there by the County. Where can you go to see live bands from other countries? You could see them at Phantasmagoria. I saw Das Ich there. Can I see Das Ich at the Gilchrest Center? Ask the people who tried to work in a Cinema and Draft House what the County did to them or made the landlord do to them. They lasted all of 3 months. So much for "vibrant". Wheaton used to be filled with the sound of music, ever since the day when Led Zeppelin opened their first US tour. Now you're almost lucky to even hear Muzak, although you can hear accordion polkas wafting through the doors of a lot of bars where nobody speaks English. In the meantime, the formerly "vibrant" El Pollo Rico is no longer violating EPA Clean Air Act and making eyes water for miles around, they've gone out of business after burning out half of one of the older "vibrant" shopping centers and putting even more old-standard businesses with ancient clienteles out of business. Oh, that's right, El Pollo Rico didn't just burn out half of the stores up there, they laundered millions of dollars and only hired illegal aliens. Sure, Wheaton is a success... but for whom, exactly? If the County's mission is to turn Wheaton into Chuck E. Cheese when they were hoping for Paris, or even Disneyland, they've excelled at failure.

You can do "walkable" at any hick town out in the sticks. Run a bus through it and it's "well served by transit". But Wheaton is bigger than that and deserves better. It needs to be "the City" and it's all of that, except that the County keeps interfering with the natural evolution of the place and the road to hell is paved with good intentions. Let's have less of the good intentions and buzzwords strung out four at a time, let's have less "astroturfing" in the blogspace, and let's let Wheaton be what Wheaton wants to be, not what Urban Planners and Party Hacks want it to be. Wheaton has its own vision of what it wants to be, and it wants to be a place where they have rock'n'roll in the recreation center, They want their library to be part of the neighborhood, not a "destination" in some county scheme that's as destined to failure as the county schemes that wrecked downtown Rockville's "urban renewal" for 30 years running. I remember what they did to Rockville -- Rockville Mall? You don't remember? You weren't born yet? -- and I've watched what they've tried three times and thrice failed to do with Wheaton.

Leave 'em be to grow their own way! It's what they want.

We Want Wheaton Back.