Eighteen months after burning down in a mysterious fire, the original location of El Pollo Rico on Ennalls Avenue in Wheaton is slowly being razed. First time guest blogger/long-time photo contributor Chip Py writes this paean to the purveyor of Peruvian rotisserie, which just hasn't been the same since it reopened late last year. 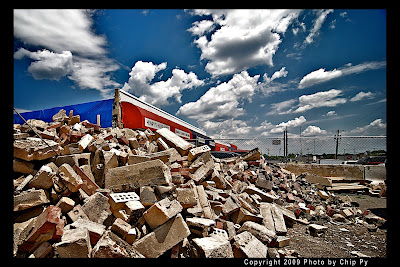 I have tried to eat at the new El Pollo Rico several times but it doesn't have the same flavor. It seems the flavor must have come from the years of grease that had built up in old place. Federal Marshalls, the IRS and Immigration authorites couldn't put and end to that flavor but a fire in February 2008 did.

R.I.P., El Pollo Rico. Your flavor is gone from Wheaton.

We can look for more of our small, flavorful Mom and Pop Restaurants to close up and be knocked down by the wrecking ball as the County moves forward with a plan based on the Downtown Silver Spring development moves forward and these small immigrant owned businesses are replaced with tax payer funded national chain stores.

Does Wheaton really want this?

For more about Wheaton, check out Chip's guest post and all the regular posts on the Scenic Wheaton blog.
at 2:00 PM

But who weeps over the loss ofSurplus Plus? At least El Pollo Rico got to re-open in a brand new location around the corner after their fire.

Surplus Plus, a favorite store of mine in my earlier days, was the fire's collateral damage and will never re-open in Wheaton. A lot of my Halloween costumes came from there.

I will always remember fondly the lifesize Schwarzenegger Commando poster they had up for many years.

Why do you call it a mysterious fire?

Kitchen hood ductwork, lined with a combination of frying grease and charcoal dust, and most likely cracked from previous duct fires, smoldered overnight until fire extended to the 1950s dry wood overhead.

"We can look for more of our small, flavorful Mom and Pop Restaurants to close up and be knocked down by the wrecking ball as the County moves forward with a plan based on the Downtown Silver Spring development"

Do you mean all the send your money to El Salvador places, or the beer and lotto card places, or the get drunk and leer at women nightclubs, or the tons and tons of vacant storefronts?

Don't get me wrong, I love Wheaton and the eats, but the place is on the skids and needs some major help....with a vacancy rate of over 30% I can think of only a few places that have expanded in the past year-Nava Thai, Irene's Sky Bar (a nightclub), the Blue Lagoon or whatever it is across from Paul Kee (a nightclub)

While you may prefer the air of desperation and the decay of being a nightclub district for day laborers, I would like my town back, thanks...and if it means trading a few vacant storefronts for some sterility, Ill buy into that bargan.

I'm with "One Star." I'm all about having unique little town with small businesses, but I'm tired of dilapidation and overall sameness--am I the only one bothered that so many of our food establishments now offer very similar fare? Where's the diversity I keep hearing about? I miss the mix. I won't be sad to see the bulldozer at work; but I DO worry about chain stores and the like replacing it. (I miss the surplus store, too!)

Thank you why would u want ro keep wheaton as a shitty version of Langley park when it could experience the same diverse renewal of silver spring. Some people just like to complain about any development and renewal no matter how bad it was b4

I don't understand this post. It's a lament about the new Pollo Rico not being the same - I share this sentiment - and then an ominous suggestion that our tax dollars are going to bring down more Mom & Pop stores. But one thing has nothing to do with the other. El Pollo Rico, as you said, was lost to a fire, not redevelopment.
The county is looking to make use of the currently unused/underused space occupied by Metro and surface parking lots. And, in the process, to add office space so that there are people around Wheaton on a weekday afternoon to patronize the businesses that are struggling mightily.
Everyone who has an affection for and an interest in Wheaton should make their voice heard. Can we start by agreeing that some change is necessary and desirable? If so, it's about what that change looks like. Of course no one wants developers with short-term motives calling all the shots. But, it's important to note, not all redevelopment is an evil, greedy, corporate plot to put Mom & Pop out of business.

Sligo: the Surplus place has re-opened some time ago right near the Montgomery College Rockville campus. I was talking to the owner -- himself an immigrant by the accent (or Puerto Rican, maybe) -- and he was highly displeased with the Pollo Rico folks.

As for what the other folks have to say... well, if they turn Wheaton into a shining wonderland of City Place clones, all that's going to happen is that all of the Wheaton ickiness will wind up in Aspen Hill. It's already long since pervaded the shopping center at Randolph Road and Veirs Mill Road.

That being said, Wheaton is in fact long overdue for recycling, in a lot of places. But there are some golden oldies like the Kosher Pizza place that needs to stay where it is or not move very far. The redevelopment folks have already run Bonifant Books out of business, and where's Barry's Magic Shop now?

Unfortunately, I wouldn't go all the way up to College Park for a surplus store. The Wheaton one was just minutes away. :(