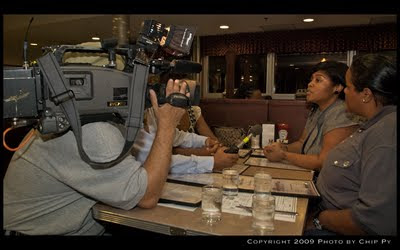 Aiyi'Nah Ford and Torian Brown, being interviewed by TV news cameras, were kicked out of Tastee Diner last week for embracing.

Supporters of gay rights came to the Tastee Diner last night to protest the restaurant's discrimination against a black lesbian couple who ate there last week. Though blogs like DCist and The New Gay and the Blade, the D.C. area's gay weekly, only picked up on the story that morning, some thirty people showed up outside the diner at Cameron Street and Ramsey Avenue for a brief press conference before going inside for a "kiss-in."

Aiyi'Nah Ford visited the diner with her companion Torian Brown late last Tuesday night and was kicked out for a public display of affection. "We came here and we ate and the service was fine," says Ford. While waiting to pay the bill, they embraced. "The manager said 'can you please take that outside?' We thought they were referring to the heterosexual couple making out next to us," Ford continues, "before we realized they were talking to us. We said 'Are you serious? It's 2009.'"

After they left, the waitress followed them out and apologized. "She said, 'It happens a lot and it's embarassing,'" Ford recalls. "That was the proverbial icing on the cake." After the incident, Brown e-mailed the Tastee Diner's manager demanding an explanation of what happened. "I was sorry to hear your complaint about your visit the other night. Our manager said he did not mean to offend anyone," replied General Manager John Littleton. Five days later, "They still haven't apologized," Ford says. "We've tried to give them several opportunities for mediation. We spoke to the owner's daughter on the phone and she hung up on us."

Inside, other protestors said they've encountered similar discrimination there. "I'd eat here alone and the manager would look at me like he thought I wouldn't pay the bill, but that might be because I'm young," says Cynthia, a student at Morgan State University who heard about the event from a Facebook invitation sent out earlier this week. "But my [lesbian] friend used to work here and said she'd never came out because of the environment." Even tonight, as Ford, Brown and several friends and well-wishers filed into the restaurant, they were asked if they wanted to sit in the back. 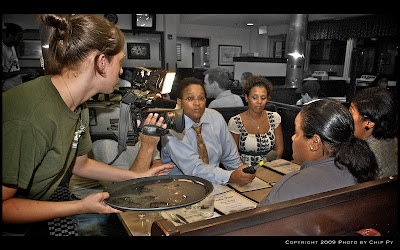 Jay Morrow and Treeva Creek-Morrow are served by a Tastee Diner waitress.

The plan for the protest, as outlined on Facebook, was to come in and order food so they wouldn't be loitering. "But we're not going to eat it," says Jay Morrow, sitting at a table with Brown, Ford, and Treeva Creek-Morrow. "We don't know what they've made it with. The long-term impact is when people know this behavior is happening, they won't eat here because they know they're not welcome here."

Heather of Springfield was eating on the Tastee Diner's patio with a friend from Silver Spring when the protest began. "Oh dear God, why are the TV cameras here?" she recalls thinking, but was excited to "watch the process of a peaceful protest unfold."

"Were they following the law? Probably," Heather says. "Was it right? No . . . I have a lot of friends in the LGBT community. It's kind of a personal thing."

County Council aide Dana Beyer was there to survey the goings-on. She sat on the board of Equality Maryland, an LGBT civil rights organization formerly located in Silver Spring, and their employees used to eat at the Tastee Diner frequently, Beyer explains. "The management must have been so upset because we used to eat here a lot," she jokes, " that they lashed out on the first gay couple they saw."

"It's not about Prop 8, it's not about marriage equality," says Beyer, who is transgendered. "it's about treating people with respect regardless of who they are."

"This is a pillar in the community, and if you're doing this, it spreads, just like H1N1."

A special thanks to photographer Chip Py, who beat me downtown to take photos and knows something about protests himself.
at 8:38 AM

It seems like many will immediately rally in support of the couple without even considering to what degree they were embracing. Without being there myself, one can only rely on hearsay.

@Bossi, no matter the perspective, at this point in time it would all be hearsay to those not there. That is, by definition, the very meaning of 'hearsay.' It's also besides the point. I might also ask, what degree of "embracing" is enough to warrant being asked to leave? Would it matter to you if the standards were different depending on the orientation of the couple?

What is certainly hearsay is the third party report of supposed discrimination: "A friend used to work there and she told me . . . "

And, following a sentence in which management apologizes (no matter how mealy-mouthed and passive it was) with a complaint in which it is claimed that they still haven't apologized is confusing to say the least.

The portion on perceived age discrimination is a great example of unwarranted piling on, as the part offered absolutely no corroboration other than the way the "manager would look at me." Great editorial standards there.

Did you even bother to talk to management? There's nothing here to indicate one way or the other.

I recommend that readers click through to the Facebook page and read it, if possible. You will see the whole text of the email from Tastee Diner answering their initial complaint:

"I was sorry to hear your complaint about your visit the other night. Our manager said he did not mean to offend anyone.Your business is always welcome here. Please feel free to come and talk to myself personally in the AM or come see Paul himself at night (The Manager Involved) and im sure you will see no disrespect was meant."

You will also see the reply, in part:

"You stated, “I was sorry to hear of your complaint” that is not an apology. This leads me to ask, if no disrespect was meant then what was meant? Initially, I thought that the hatred and bigotry that we encountered at Tastee Diner was limited to a select few employees. Your email has led me to believe that these ideals are apparently core company values."

What is really sad about this is the reminder of the many ways in which supporters of progressive causes tend to be their own worst enemies.

wombat, I'm not sure what you're getting at exactly. But, if it was directed at my comment, I would defend my admittedly bitchy and over the top remarks by noting that I found the structure of the narrative disconcerting considering the power of the subject.

Blogs are hardly newspapers, nor should they be held to the same standards, but this posting had neither the narrative focus nor the passionate clarity of the (more recent) follow up. I shouldn't have to withhold criticism just because I happen to agree with the argument (but I should be nicer about it).

And, I hope that when an apology comes from diner management, that they employ something other than the passive voice and don't put the transgression back on the victims: "I'm sorry that you were offended," instead of the more direct (and real), "I'm sorry we were offensive."

Now there are things that should be done in the privacy of a bedroom or similar space, and since I was not there, I can only go by what I have read and heard in the news media.

But I have to wonder about the management of Tastee Diner using the old "family" argument for an encounter that everyone agrees took place late at night.

And "family values" are frequently an excuse for gay-bashing, too.

When will we have a Waffle House place in Silver Spring?

WTF!!!These women were going beyond a simple embrace. One girl had her face buried in the others breasts not once but twice. Good Gravy people It's called simple manners and decorum, which most people have thrown out the window, I don't care who it is I don't want to see that, regardless of your sexual orientation! The Tastee Diner is a Restaurant not a club!!!

Ah, for the good old days when people would all speak as one and advise people who were getting a bit too lost in the moment: "Get a rooooom!"

Transplant that era of good manners into the modern day where we're not supposed to give a spit about the race, gender, or species, and it's not about being gay or straight or transgendered, it's about Public Display of Affection gone overboard.

A kiss on the cheek is one thing, sticking your hand in someone's clothes in an all-ages restaurant, that's another thing.

So, all of this being third, fourth, and fifth party rumors -- and me having been on both ends and in the middle of that sort of thing and being dead sick of the whole phenomenon -- why don't we all STFU about it until and unless actual information, rather than innuendo and rumor, is brought forward.

Following offense with even more offensiveness is, well, offensive.

If, on the other hand, someone tossed this couple out undeniably and with ample witness solely for being openly gay, that's a civil rights violation and it needs to be addressed by the appropriate legal authorities, with anything from an operating license getting pulled to having the EEOC look into the matter.

Of course, I can tell you from personal experience that the local legal structure isn't very good at dealing with discrimination by management (or with management tolerance/approval) against customers, and in fact the only thing that could possibly be sure to work might be protest and boycott.