what's up the pike: locke, demosthenes and you 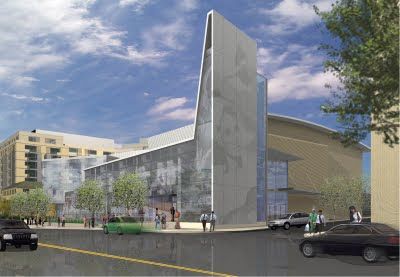 - The website of MC's new Performing Arts Center shows the new facility with buildings that don't yet exist. Next to the venue is the historic National Institute of Cleaners and Dryers at 8021 Georgia, slated to be redeveloped with 210 condominiums. A site plan was approved in 2006, but it's still years away from putting a shovel in the ground. The phantom building also appears on the websites of Silver Spring Downtown and the Bach Sinfonia, which will be performing at the music hall.

- Tomorrow, the Planning Board reviews a draft of the Purple Line Functional Master Plan, which seeks to guide how local neighborhoods will adapt to the proposed transitway between Bethesda and New Carrollton. The plan isn't making development or zoning recommendations but rather suggestions about the appearance of and access to the line's ten planned stations within Montgomery County.

- Six dollars to drive the InterCounty Connector sounds like highway robbery to some and totally justified to others. Both sides get to make their case to state transportation officials at public hearings on the proposed tolling plan this week. The first is tonight at High Point High School in Calverton followed by another tomorrow at Shady Grove Middle School in Gaithersburg. Both events run from 6 to 9pm.

- And the Rocky Horror Show - a theatrical version of the 1976 cult-film Rocky Horror Picture Show has its second local run this month with the Kensington Arts Theatre. There'll be performances this Friday and Saturday and continuing well into November at the Kensington Town Hall, 3710 Mitchell Street. Check out KAT's website for more info.
at 9:09 AM