It's 1972, and you're desperately trying to unload houses in some place in Montgomery County. How are you going to get people to buy? If you're Bill Levitt, it's with references to back-alley deals and pleas to nascent environmentalists, of course.

In the 1950's Levitt became famous for building the Levittowns, city-sized planned communities in Long Guyland, New Jersey and Pennsylvania. His identical two-bedroom cottages spawned quite a few copycats in his time, but the only thing he built in MoCo was Strathmore at Bel Pre, which opened in 1968 on Bel Pre Road near Layhill Road.

Levitt called the location "the preferred manor club area of Montgomery County," which never quite stuck. With only a few hundred lots, Strathmore was considerably smaller than the Levittowns, but its homes (selling for as little as $38,990, or $253,000 in today's dollars) were known for groovy features like sunken conversation pits and entry courtyards.

Part of the property lay across Bel Pre Creek and the now-defunct Outer Beltway and could never be physically connected to the rest of the neighborhood, so it was spun off into a new subdivision, called Parc Bel Pre, located along Georgia Avenue. To sell the last few lots so he could get out of MoCo once and for all, Levitt ran a full-page ad in the Washington Post.

a shady deal you can be proud of!" it screams. (I miss a time when text in all-lowercase letters was not only encouraged but mandatory.) "Announcing a NEW SECTION at Parc Bel Pre." 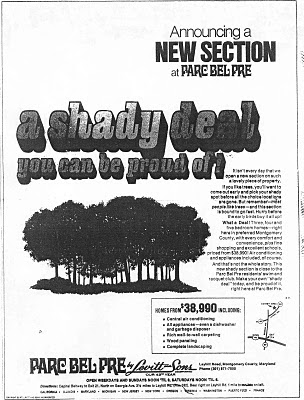 The copy reads (emphasis theirs):

It isn't every day that we open a new section on such a lovely piece of property.

If you like trees, you'll want to come out early and pick your shady spot before all the choice locations are gone. But remember-most people like trees-and this section is bound to go fast. Hurry before all the early birds buy it all up!

What a deal! Three, four and five bedroom homes - right here in preferred Montgomery County, with every comfort and convenience, plus fine shopping and excellent schools, priced from $38,990! Air conditioning and appliances included, of course.

And that's not the whole story. This new shady section is close to the Parc Bel Pre residents' swim and racquet club. Make your own "shady deal" today, and be proud of it, right here at Parc Bel Pre."

Such friendly advertising compared to today. Off-hand drug references. A friendly nudge to the environmental movement. ("'Most people like trees?' Honey, I thought this wasn't Takoma Park," groans the exasperated spouse.) Simpler times when all you needed was A/C and a dishwasher, not to mention a healthy dose of wood paneling - standard. When Wheaton Plaza was still called "Wheaton Plaza, one of the finest shopping centers in the East."

Today, Strathmore and its sibling Parc Bel Pre are established neighborhoods, though their residents - many of whom are the original owners - are getting older. The latest issue of the HOA newsletter (warning! PDF file.) has news from the "50+ Club" and "A Special Note for Adult Caregivers." There's even a link on the Strathmore website to the now-defunct slow-growth organization NeighborsPAC, for residents who "want to know what's really going on in the county."

Thanks to Kevin from LevittownBeyond.com for the info and images.
at 12:58 PM

Anyone who wants to get waaaay deep into the Strathmore at Bel-Pre development can always see our handy collection of Plat Maps.

I have to admit I was rather surprised to discover that the development was built by Levitt, ordinarily one would tend to expect lower quality from that name than what's actually there.

A lot of people don't know that Levitt started out building luxury homes on Long Guyland. Even when doing his Levittowns he was trying to take that mass-production model and make it high-end. The Strathmore name appears in a couple of similar Levitt developments around the country.

Dan, you forgot to mention Levitt & Sons' last Levittown - Belair at Bowie. 2010 will be the 50th anniversary of the opening of the model homes in the development, and the Vernacular Architecture Forum will be studying and visiting Bowie next May (along with three other communities in greater D.C. - including Greenbelt). I blogged about this just last week.

In reference to Tom Hardman's comments, Levitt & Sons left no doubt that they were in the business of making money. For example 2x3s were used instead of 2x4s for non load bearing walls. But I have heard from contractors who claim that the quality in the old Levitt houses is better in some cases than new constructions that they've seen.

Here's a bit of Levitt trivia. Did you also know that Levitt built homes in Puerto Rico and France?

@Sligo: The fonts? Hopefully not the ones on my website, if there's a problem I'll try to fix it.

If, on the other hand you are discussing the fonts on the Parc Bel Pre flyer, well, that might explain all of the Grateful Dead music you hear up in that neighborhood. Might have something to do with the high level of birth defects associated with massive consumption of hallucinogens. ;)

@ Dan: With all due respect, I have finally figured out why you seem see the need for building immense beehives-for-people everywhere.

I don't like it at all, but... you may be right. You could have said something about it, though.

As the president of the Bel Pre Recreation Association, I thank you for this fascinating peek at the past and calling us not as unpleasant as one would expect.

I actually live in a disconnected part of the development built later in what the original platts show as the outer beltway on-ramp (now the Matthew Henson Trail).

To this day we are struggling with Levitt's ham-fisted marketing. He half-crafted an early generation of land-use covenants in hopes of winning FHA backing. He dropped the idea without droping the documents, so we have rules that neither the developer nor anyone else has ever enforced. Every now and then, someone says, "Hey, can we still make people use metal trash cans, forbid a fourth pet and push out group homes?"

Unpleasant? Not at all. Strathmore seems like a lovely, established neighborhood. Kinda wish there were more conversation pits, though.