- Friend of JUTP Whitney Teal interviews me for her new blog, the Washington Media Project. In it, I talk about how JUTP got
started, the state of local news in East County, and what (if any) impact I think I've had.

- The City of Takoma Park will restrict traffic on Ritchie and Mississippi avenues due to fears that rush-hour road closures in adjacent Sligo Park Hills will further burden their streets. Rather than close public streets to drivers who pay taxes for them but may not live there, good neighbors might want to push for better traffic calming - speed bumps and chicanes - rather than creating more congestion on busy Philadelphia Avenue and other roads.

- Opponents of a self-storage facility locating in Burtonsville asked if they "were settling" by letting it happen. It turns out we weren't: tomorrow, the Planning Board reviews a proposal (PDF!) to build a mixed-use development right next door. Dubbed Star Pointe Plaza, the three-story building to be located at Route 198 and Dino Drive would have 16,000 square feet of offices and 8,400 square feet of retail on the first floor, enough room for several shops and restaurants. There'd also be a patio for outdoor dining with a view of the parking lot.

Below, a building elevation (from the right side, facing the parking lot) and a site plan, with north facing up: 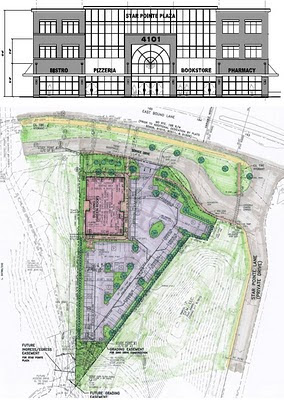 - Jerry McCoy at Then and Again jumps a fence to find Dick and Jane figures playing ball in the lot on Thayer Avenue where Studio Plaza will soon be built.

- Our page on Facebook just broke three hundred friends! Thanks for "liking" us!

- Come back later today to find out what happened at last week's skateboarding rally at Fenton Street Market.
at 9:37 AM