why are moco's republicans so ridiculous?

Last week, Richard Layman at Rebuilding Place in the Urban Space wrote that because the District is so heavily Democratic, the Republican candidates who run in most local races are generally very weak because they have little support either from their party or from the community. Though I'm a registered Democrat, I'm easily swayed by Republicans bearing pastries and I share Layman's frustration because good government comes from having officials with different ideas and beliefs. It sucks that Republicans in Montgomery County are just as sorry as their counterparts in the District. 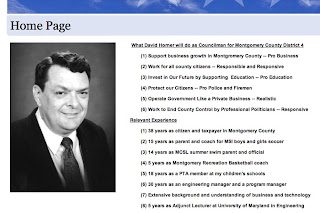 Just look at David Horner, an engineer from Fairland who's running against incumbent District 4 County Councilmember Nancy Navarro. If Horner was running in a more conservative area - somewhere in Western Maryland, or maybe in parts of Baltimore County - he'd probably have lots of support, funding and a full staff to research the issues and what his potential constituents want. Without any of those things, he has to resort to some stock conservative talking points about taxes and thinly veiled racism.

The first point on his homepage is that he's "Pro Business," and responses to a questionnaire from the Greater Silver Spring Chamber of Commerce say he'd like to turn Silver Spring into the "Tysons Corner of Montgomery County," his "issues" page complains about "out of control" spending from the County Council on a Director of Economic Development who "does nothing." Is it really a waste of money to hire someone to attract businesses like this one to Silver Spring?

A little further down, he's expressing some pretty racist statements about people of Hispanic descent, who apparently never have to learn English in this county. "Legal and illegal Spanish speaking immigrants continue to speak Spanish, bank in Spanish, vote on Spanish ballots . . . they have poor employment futures as day laborers, lawn maintenance personnel, and cleaning staff," writes Horner, adding, "Crime and gangs result." Is he aware that his opponent is a legal immigrant from Venezuela, a college graduate, and speaks perfect English? Horner wants to "Improve access of all Montgomery County citizens to County Government staff and Council members," but only if you speak English.

Finally, Horner tries to express his disdain for current Councilmembers while possibly describing his own motivations. In the Chamber's questionnaire, he describes current members as "one-note local political activists and/or failed local attorneys who seek Council membership for its income and fringe benefits."

If elected, Horner would make $94,000 a year, which is more than the county's median income but probably not enough that he could buy his own house today. And he'll be excited to find that those fringe benefits include a frustrating commute to Rockville, long hours spent in committee meetings, and nights spent away from your family at public hearings with constituents, some of whom speak Spanish. There are much easier ways to make $94,000, and I doubt any of our current Councilmembers would say they do it for the money.

We're lucky that District 4 has been well-represented by both Councilmember Navarro and Marilyn Praisner before her, but I certainly feel sorry that every four years both women have had to put up with sorry opponents like Horner and others. Voters in Montgomery County of both parties deserve a better choice from the Republican Party.
at 9:38 AM

Very good, you've personalized the issue— and, above all, blurred it. Horner, you're telling us, is not really bothered by illegal immigration per se. Rather he is “anti-immigrant”. You've sucessfully transmuted the issue into one of hating real people rather than opposing an illegal activity. Typical Left. Learning the language is a processes of assimilation, intermarriage, and integration — the traditional mechanisms by which legal arrivals successfully melt into the American mainstream. Give me more Republicans that won't meet illegals at the border with a bag of food stamps and an ID card...

Pablo, Dan EXPLICITLY QUOTES the part where he EXPLICITLY says he is criticizing both "legal and illegal" immigrants. Try learning to read -- it helps!