Burtonsville's had a hard time over the past few years. A highway bypass hurt local businesses, the beloved Dutch Country Farmers Market skipped town, and nearly a third of the village center is vacant. But that could soon change if a redevelopment plan is adopted. Montgomery County planners say they know how to stop the bleeding. Their Burtonsville Crossroads Neighborhood Plan, which will be discussed at a public hearing on Thursday, would revitalize Burtonsville's village center with new investment, new street connections, and new open spaces.

While the plan has many great suggestions, questions remain about how it introduces housing into the commercial district.

This isn't the first time planners have looked at Burtonsville. In 2007, the county studied local retail (PDF), concluding that Burtonsville couldn't compete with larger shopping areas and needed to differentiate itself. A charrette in 2008 resulted in recommendations for mostly aesthetic improvements, like new landscaping on Route 198 and facade improvements for local businesses. Many businesses along Route 198 received new storefronts from that proposal, which was carried out with grants from the Montgomery County Department of Housing and Community Affairs. Nonetheless, challenges remain, such as a lack of sidewalks, visual clutter, and a lack of community organizations. The Burtonsville Bypass, completed in 2006, deprived many businesses of customers. As a result, 30% of the area's retail space is now empty. Many shops have moved to Maple Lawn, a planned community a few miles north in Howard County, or just across the street to the newly built Burtonsville Town Square shopping center.

The area does have some strengths, however. A strip of well-reviewed sit-down and ethnic restaurants has emerged along Route 198, earning it the name "Restaurant Row." Five bus routes now serve the Burtonsville park and ride lot, including the Z Metrobus, one of the most popular lines in the region.

Though many residents were once skeptical of any new development, they're now anxious for the same jobs and shopping amenities other parts of the county enjoy. When Colesville Patch polled residents about what stores they'd like to see in Burtonsville, many asked for "nice restaurants" and "entertainment venues" while lamenting that they now have to drive to Silver Spring, Rockville or Columbia for them.

In response, county planners seek to make Burtonsville a destination, using its rural heritage to distinguish it from surrounding areas while allowing property owners to give residents the amenities they want. 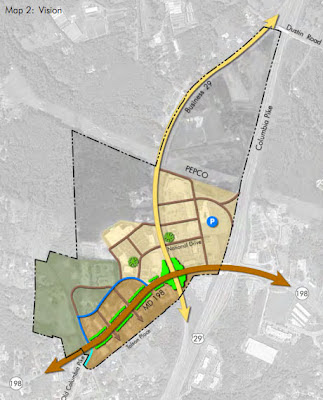 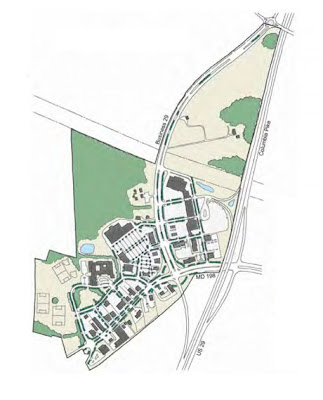 Though the Burtonsville Bypass and recently-opened InterCounty Connector take potential shoppers out of Burtonsville, they also reduce the burden of car traffic on Burtonsville's two main streets, Route 29 and Route 198. Thus, the plan proposes converting Route 198 from a run-down highway into a "main street" serving primarily local traffic. The street would have new sidewalks and bike lanes, along with trees and a landscaped median. Left-turn lanes and curb cuts would be consolidated to calm traffic. And a new grid of smaller streets would tie the village center together, making it easier to walk or bike throughout the district.

The plan also bolsters the existing "Restaurant Row," proposing additional funds for façade improvements and the creation of a chamber of commerce for area businesses. It also replaces the current zoning, which basically only allows strip malls, with a new CR or Commercial-Residential Zone that allows property owners to add housing or other uses alongside existing shops. A new public green would hold events like the yearly Burtonsville Day festival.

Property owners can also build up under the new plan. Building height limits would be raised to 75 feet at the Burtonsville Crossing shopping center and adjacent Burtonsville Office Park, which already has buildings about 50 feet tall. Planners hope this will encourage the redevelopment of the shopping center, which is more than half empty. Elsewhere in the village center, height limits would range from 45 to 65 feet.

There are also provisions for additional open space. A 3-acre lot in front of Burtonsville Elementary School would become a "Public Green," which was first proposed 15 years ago in another plan. The green could accommodate large gatherings, like the yearly Burtonsville Day festival and parade. Planners recommend that an adjacent 15-acre plot called the Athey Property become a public park with playing fields, which may be needed in the future (PDF).

North of the village center, the plan keeps the existing Rural Cluster zoning to preserve woods, farmland, and the Patuxent River, which provides drinking water to the area. It also proposes restoring the Burtonsville Forest Fire Lookout Tower, which was built in 1945 and is eligible for listing on the National Register of Historic Places.

In total, the plan could allow for as many as 600 new multi-family homes and between 150,000 and 670,000 square feet of new office and retail space, which could accommodate as many as 2,100 new jobs. If built out, the plan would effectively double the amount of commercial space and employment in the village center today.

Small-lot single-family homes and townhomes like those at Wyndcrest in Ashton may be the most realistic solution for the village center.

Nonetheless, there are some issues with the type of development the plan proposes. Although it calls for multi-family housing, there may not be any demand for apartments or condominiums in an area so far from established job centers, and neighborhood opposition to that type of development remains high. But with just 8 single-family homes, the village center could use additional residents to support existing businesses and provide a market for new ones to fill vacant spaces.

As a result, senior housing may be more feasible than conventional apartments. Senior housing has been proposed before for the village center, and could allow older residents to age in place near friends and family. Planners should also look at townhouses or small-lot single-family homes like those at Wyndcrest, a New Urbanist neighborhood in Ashton designed as an extension of a semi-rural village. Not only are homebuyers interested in that kind of housing, but they could provide a better transition to surrounding areas than apartments.

Turning the Athey Property into a small neighborhood like Wyndcrest is a better use for that land than a park, especially since it was already approved for houses in 2007. The "Public Green" in front of Burtonsville Elementary provides more than enough open space for events like Burtonsville Day. If there's a need for playing fields, they can go on some of the 170 acres purchased by the county and the state throughout Burtonsville for new parks.

The Burtonsville Crossroads Neighborhood Plan takes stock of Burtonsville's potential and creates a compelling vision for its future. With some small changes, it can get the village center on the right track.

The Planning Board will hold a public hearing on the plan at 7:30 pm on Thursday at the Planning Department headquarters, located at 8787 Georgia Avenue in Silver Spring. To testify or for more information, visit their website.
at 2:00 PM

The Dutch Country Market didn't really skip town. Remember that the owners of the shopping center didn't renew the lease.

After the Rt 29 Bypass was built, (which was 7 years ago) it should have been obvious that Burtonsville needs people. After the large flow of traffic was re-routed, there was no longer enough people to support the commercial zones. There was no residential core.

With this problem in mind, the County Plan to support yet another park makes no sense. This will not help Burtonsville in the slightest, and will in fact seal its sad fate. Burtonsville needs more people.

The County should support multi-family residential housing on the 40 acres next to the Shopping Center. Burtonsville needs a residential core. It has none, which is the problem, to which there is a real solution.

Maple Lawn, on the other hand, has a balanced development Plan with lots of multifamily housing to support the Commercial centers. In hindsight, it is clear that the Howard County Planners are much sharper than the ones we have here in Montgomery County. Pity. The contrast between Maple Lawn and Burtonsville cannot be denied.

The time has come to stop this long tradition against growth and development that has been foisted on this town. Such a short sighted agenda has ruined Burtonsville, which will never be able to match up to Maple Lawn. However, the town can learn from its past mistakes and take some much needed action to change things for the better.

This fall is a vote on the fate of Burtonsville.

It is time for common sense to take over.

The only hope to save Burtonsville is to develop residential housing next to the failing shopping center. The more housing/people the better, and the sooner the better. This should have been done years ago, and now the planners are trying to make sure that their obsession to prevent development is made permanant. Even though it is obvious that the town is dying for lack of people, this "no growth crowd" would rather let the merchants suffer and go bankrupt than allow development.

Such an attitude is outrageous, unprofessional, and destructive, showing little care for the many people that have been hurt by this harmful, anti-growth agenda.

It is time for the community to take action to SAVE BURTONSVILLE !

Support Residential Housing next to the Shopping Center!