After nearly 60 years in production, the Gazette, a chain of weekly local newspapers in Montgomery and Prince George's counties, will shut down in August. That means an area of over two million people won't have a local newspaper. 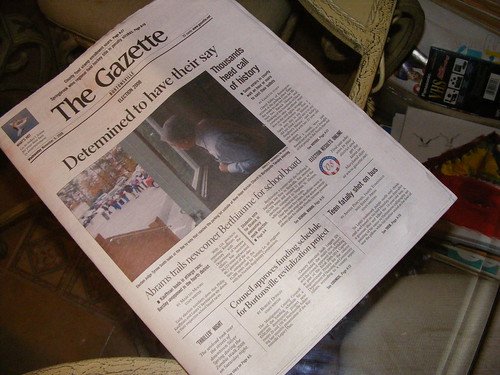 Post Community Media LLC, which owns the Gazette, announced the closure this morning at the Montgomery County edition's offices in Gaithersburg. Washington Post reporter Bill Turque tweeted the news shortly after. 69 people will lose their jobs.

The free, weekly paper's closure is a huge blow to the region's local news scene. While there are many more ways to get your news now than there might have been when the Gazette opened in 1959, it's unclear whether any of those media can fill the void.

During the 20th century, the Gazette expanded from a single paper in Gaithersburg to a chain stretching across Montgomery, Prince George's, and Frederick counties. In 1992, the Washington Post Company bought the Gazette.

The paper's decline has been obvious for years through rounds of layoffs and cutbacks. What was once the "Silver Spring Gazette" later became the "Silver Spring/Takoma Park/Wheaton/Burtonsville Gazette" as the local editions either closed or merged with each other. In 2013, the paper ended its coverage of Frederick County and statewide politics.

The Gazette's parent company still owns local newspapers in Southern Maryland and the Fairfax County Times, which appear to be safe for now.

The Gazette helped me become an activist

I remember the first time I ever saw the Gazette: it was 1995, and the cover story was about a megamall they wanted to build in downtown Silver Spring. I sat in the backseat of our family's car staring at the pretty rendering, dreaming of what could be. I was inspired; after all, there was going to be a waterslide three blocks from my house! My very first act of civic advocacy was to circulate a petition supporting the mall into Ms. Furtado's third-grade class at Woodlin Elementary School.

My petition wasn't successful, but over the past twenty years, the Gazette helped me get involved in my community. A Gazette photographer captured me meeting then-Congressman Al Wynn when he came to speak at my high school. When I started my own blog almost nine years ago, I frequently grumbled about Gazette articles or letters to the editor.

Lately, the Gazette has used me as a resource too: I've been quoted there eight times in the past two years, on everything from the Silver Spring Transit Center to my Wheaton Plaza shirts to MoCo's nascent rap scene.

So where will we get our news now?

Without the Gazette, Montgomery and Prince George's counties and the over two million people who live there will no longer have a weekly print newspaper. (There's still The Sentinel, but it's a much smaller paper and not free.)

Admittedly, I don't really get my news from newspapers at all, and I imagine a lot of people are the same way. I hear about things from neighborhood blogs, community listservs, from Facebook and Twitter, and from friends and family. AOL's Patch network provided incredibly fine-grained local coverage for a few years before it failed. More recently, the merger of local news sites BethesdaNow and Bethesda Beat led to expanded news coverage not just in Bethesda, but across much of Montgomery County.

But there are still some pretty big gaps. None of these publications really cover county or state politics, or do in-depth investigative reporting. They also don't give readers news, sports, arts, and business coverage in a single package. Not to mention that local newspapers are a valuable training ground for young journalists. I got to know a number of former Gazette reporters over the past nine years, like Aaron Kraut (now at Bethesda Beat), Aline Barros (now at Montgomery Community Media) and Elahe Izadi (now at the Washington Post), and it's been cool to watch their careers develop.

We need a new model for local news

Amazon CEO Jeff Bezos buying the Washington Post Company (the Gazette's parent company's parent company) two years ago might have been a sign of the end for the Gazette. He's expressed a desire to shift from from local coverage and focus more on national news, and a chain of local newspapers doesn't really serve that goal.

So whose goals do align with running a local newspaper, or at least a news source with the same level of depth and authority as a newspaper? That's a question news organizations and communities around the country are grappling with. A newspaper tells the story of a community. But come August 11, Montgomery and Prince George's counties will have lost a storyteller.
at 1:00 PM

Those papers in southern Maryland and Fairfax County were sold to other companies. The Post tried to sell the Gazette as well, but said they weren't able to find a buyer.

So if you though they were getting a little "out of touch" in MoCo, to say it politely, "you ain't seen nothin' yet".

The "echo chamber" will be all online now, and we mourn the passing of the Gazette because at least they had the editorial oversight to keep the spin spinning the way they wanted it spun, rather than letting it spin out of hand and go who-knows-where.