drew powell: forget the brakes, look for balance in growth 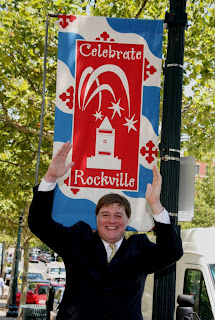 Now that Drew Powell - former head of the Neighbors for a Better Montgomery - has thrown his hat into the Rockville mayor's race, he's facing a level of scrutiny he escaped as an advocate of slow growth at a time when most figured Montgomery County was headed that way already.

Over stuffed sandwiches at Potbelly a few weeks ago, Powell explained to me how NeighborsPAC works - and what he really thinks about Big Development.

For nearly a year, Just Up The Pike's been talking about "Where Are The Brakes?," a thirteen-page manifesto drafted by Powell's fellow Neighbor Jim Humphreys. First written after the 2002 County elections, "Where Are The Brakes?" encourages a level of distrust between citizens and the development community.

"Be careful not to tip your whole hand," when talking with developers, the pamphlet warns. "Developers will try to pump you for any negative reaction to their projects so that they can prepare responses to your concerns for inclusion in their plan presentations."

pictured: a new subdivision off of Musgrove Road in Calverton.
Other passages are even harsher:

"Beware the wolf in sheep's clothing! There is evidence that neighborhood associations in several areas of the county have been co-opted by development interests."

Powell tries to explain the reasoning behind the wariness towards the business community. "Jim Humphreys is my friend, but I don't agree with everything he says," states Powell. "He wrote 'Where Are The Brakes?' . . . you have to understand the context under which that document was written."

A look at NeighborsPAC's website reveals a special page devoted to "Where's The Land?," a presentation done by local land-use firm Rodgers Consulting for developers at the International Builders Show in Las Vegas three years ago.

Nothing more than a crude PowerPoint that encourages developers to - among other things - utilize "creative design" and "context-sensitive infill" as tools for getting projects approved. Its main points include "respect and understand your neighbors' issues" and insists that "trust and credibility are everything." As examples of quality development, it holds up Rodgers' own Wyndcrest and Bancroft, two communities in Ashton that residents have declared the standard for all new construction. While these don't sound like the tactics of a greedy developer, comments towards the end of the Rodgers presentation had the Neighbors' red flags up. "Control elections," the presentation says.

"Build coalitions. Use [candidate forums] as an opportunity to get across YOUR agenda. This is your bottom line: you need X of Y votes."

"It's not a level playing field," Powell laments. "These big attorneys are getting paid $500-700 an hour by developers to further their interests . . . Jim Humphreys isn't getting paid. He's doing this at the expense of every other thing in his life."

Powell pauses. "I can't say this strongly enough," he says. "I do not have anything against developers," Powell insists. "If I were a developer, I'd be trying to maximize my profits any way I could. My issue is with the elected officials who choose to take more than half their contributions from one industry. In this case, our industry is development."

The Rodgers presentation was a turning point in the mission of NeighborsPAC, transforming it from little more than a citizens' group to a full-fledged army waging war against the sea of "overdevelopment."

"We do have bridges and roads that are crumbling," Powell says. "There's infrastructure that needs to be replaced . . . taxpayers pay for all this crumbling infrastructure. In addition to those costs, we don't need to subsidize infrastructure for new construction."

And for Powell, the work of companies like Rodgers Consulting only puts a harder strain on the people who are already here.

"The 'who pays' part is the key," Powell says, "if neighbors have to hold the bag for development. The average infrastructure (roads, sewers, schools) cost for a new house is $36,000, but the impact fees a developer is required to pay for it is only $7,000. While next year's Annual Growth Policy - to be decided this fall - could dramatically increase those fees, a gap in funding would still remain - and it would go to taxpayers. As mayor of Rockville, Drew Powell would be forced to tackle the "who pays?" issue in a big way as the ongoing Town Center redevelopment threatens to drain the city's funds. In our previous post about Powell, he explains how city residents are being taxed for everything in the new Town Square. "We have to be careful as we move ahead," he says. "Development has to be supported by current or budgeted infrastructure."

The key to Rockville's success, he says, is to encourage some new growth while keeping what makes the city so great. "I'd like to preserve Rockville's hometown character while moving it ahead," he explains. "I don't think the citizens of Rockville want to live in Bethesda."

That statement seems to sum up Powell's ideal for citizen input: that an elected official should respect what his constituents don't want in their community. (Whether Rockville doesn't want to become Bethesda JUTP will not try to figure out.)

"I think everybody's a NIMBY," Powell says as we stand before the new Rockville Town Square - the Bethesdafication, if you will, of Rockville. "Everyone's against something in their neighborhood. And everyone has the right to weigh in on what they feel is appropriate in their neighborhood. That's the issue . . . is trying to achieve a balance."

top photo courtesy of Drew Powell; all other photos taken by Dan Reed.
at 12:01 AM

Drew Powell is the only candidate that can stop developers from overtaking the City. Giammo/Hoffman scandalous city leadership have sold out to developers and are allowing developers to build megacities within City limits. The Twinbrook Commons will overwelm local neighborhoods and the congested Twinbrook Parkway with traffic. People will use Twinbrook Parkway, Lewis Avenue, and other local residential roads as a cut through to this new development. Its insane. The City must put down excessive development that Hoffman/Giammo has made Rockville in to miles of gridlock. Drew Powell is the only candidate who can stop our quality of life from declining even more. Lets put Powell in charge of our city and elect a slate of progressive new candidates to our city council. We deserve better.

hmmm.... what do you want to bet that "informed_voter" is Drew Powell?

Powell's got my vote!

Susan Hoffman, stop acusing every poster of being Drew Powell. You need to recognize that he has a good amount of popular support and your candidacy is teetering on the edge of failure. Once the voters become acclimated to the issues, such as how you and Giammo ripped off city taxpayers in the town center paving scandal and the giveaway to VisArts. Rockville residents are tired of overdevelopment that will worsen the 7 day a week gridlock on Rockville Pike and the awful cut-through traffic that has decimated our quality of life. You should resign for the paving scandal.

Susan Hoffmann's ego is so big that she thinks anyone who posts negative comments on here MUST be Drew Powell. Get a grip! I'm voting Drew... he's genuine, at least.