what's up the pike: all about me

I usually don't talk about my life off the blog, but a few big things have happened to me in the past week or so that I thought was worth sharing with y'all: 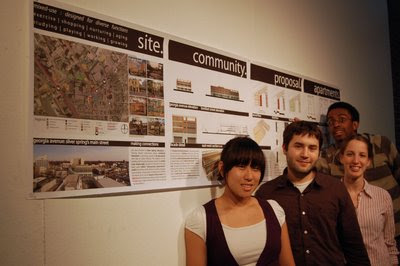 - My friends Alice, Tony, Sandy and I took second place in the AIAS Livable Communities Design Competition, sponsored by the AARP. Our proposal was for a mixed-use, mixed-age apartment complex at the corner of Georgia Avenue and Bonifant Street, currently home to a Chevy Chase Bank, whose facade we preserved in the new building.

You might remember my previous posts on the project, which we've worked on since January. Eventually, our presentation boards will be posted on the AIAS website, but in the meantime, above is a rendering of our building as it would be seen from atop the Metro parking garage a block away. - Last fall, I was involved with an Alexandria-based group called Youth Voices for Unity, which seeks to bring local students and artists together to create work that discusses issues of race, identity and prejudice. (It reminds me of the Gandhi Brigade with posters instead of videos, though it's run through Alexandria City Public Schools.) With the help of two freshmen from T.C. Williams High School, I developed a poster for their "We Are More Than What You See" campaign, which will hopefully start to appear around Alexandria in the coming months. In the poster, three kids representing different stereotypes (the "preppy girl," the "punk," the "thug") have thought bubbles representing dreams or goals that contradict the identities given to them.

My work and others created by local artists will be unveiled next Thursday, May 7 at 7pm at the Del Ray Artisans Gallery, 2704 Mount Vernon Avenue, Alexandria. - The Faux Paz, a co-ed a cappella group at Maryland that I've been a part of for four years, just released their fifth studio album, Busy Work, for which I designed the artwork. In keeping with the title, the album cover is supposed to look like scribbles in a student's notebook. You should be able to buy the CD at our website pretty soon. (I'm also the webmaster, and I haven't set it up yet. My bad.)

- And, of course, check out my second-to-last weekly column in the Diamondback, U-Md.'s independent student newspaper. There'll only be one left before I graduate next month.
at 11:04 AM

Did your project "take out" 965 Thayer Avenue, the 1932 building that Negril occupies?

Yes. We worked to keep it in - the original idea was actually to leave all three existing buildings (Chevy Chase Bank, Langano at GA and Thayer, and 965 Thayer) and build around them, given that the competition gave us a height limit of four stories, we had to expand out rather than up. Incorporating the Chevy Chase Bank facade was our "compromise," if you will.

Well, I guess then when even academic development projects encourage destruction of a community's history, I know there is no hope...

For starters, my school does have a historic preservation department, so it's not like we have an agenda of "destroying a community's history." If you're joking, I can't really tell.

Second of all, this was a design competition. The judges may or may not have been familiar with the site or any historic buildings on it, nor would they have cared. That wasn't the point.

Third of all, as much as I care about the preservation of buildings in Silver Spring that meant a lot to me growing up (which wasn't all that long ago, but I can remember when the shopping center at Georgia and Colesville was boarded up) I care even more about the preservation of existing businesses. Our proposal contains 12,000 square feet of retail, meaning that the bank, Langano and Negril could all come back.

The rent is an issue - it's why Jane Jacobs advocates keeping a supply of historic buildings around, because they're cheaper - but that wasn't our main concern.