what's up the pike: this week in housing

A two-alarm fire in a Long Branch high-rise injured one firefighter and a civilian injured by falling debris, reports the Montgomery County Fire and Rescue Services blog. The blaze, which occurred on the twelfth floor of the Pineway Towers condo on Piney Branch Road, was reportedly caused by an overloaded extension cord. The County Council approved the purchase of fifty-two acres in the planned Fairland Park subdivision for an addition to Fairland Recreational Park, both located in Burtonsville. The new parkland is located on the northern end of the site (at right).

- Fairland Recreational Park in Burtonsville grew by fifty-two acres yesterday as the County Council voted 7-0 to purchase land in the planned Fairland Park development. The Advance Land Acquisition Revolving Fund, set aside to mitigate the nearby InterCounty Connector's impact by preserving land elsewhere, was used to buy the property from builder Artery Homes for $8.75 million dollars, the site (warning! PDF file.) was slated to hold 109 new homes. "The housing crash has presented Montgomery County with a once-in-a-generation opportunity to protect and preserve land at a steep discount," says Councilmember Nancy Navarro (D-Colesville) in a press release sent out yesterday morning.

Located at Route 198 near Old Gunpowder Road and straddling the Montgomery/Prince George's county line, plans for the 365-home Fairland Park community went through several iterations before being approved last May. If the rest of the site is developed as originally intended, it will contain 256 single-family homes and townhomes, along with land for a new elementary school. The new addition to Fairland Recreational Park is closest to Route 198, creating a buffer between the development and older, large-lot neighborhoods across the road.

Full disclosure: I work for County Councilmember George Leventhal, who was not present at the vote. All statements and opinions made are solely my own. 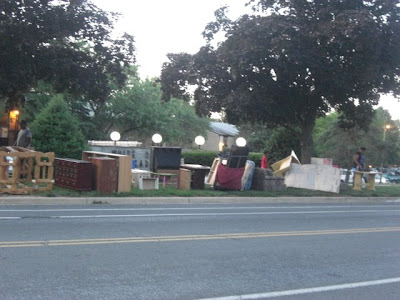 A reader sent in this photo of a family being evicted from their apartment on Lockwood Drive in White Oak. I don't know any of the details: if they were living in a market-rate unit or subsidized apartment; why they were kicked out; and if they've got a place to stay tonight. And while I'd say it's a sign of the recession, but rising rents in this area made it difficult for people to make ends meet even before the economy went down. If you're having an issue keeping a roof over your head, I'd recommend contacting the county's Department of Housing and Community Affairs.
at 9:27 AM