what's up the pike: reverence for life 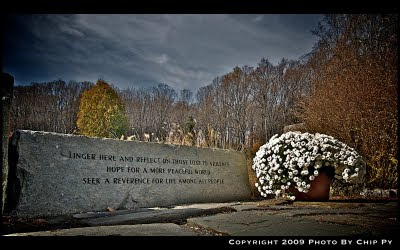 - Happy Veterans' Day, East County. Today's a day to commemorate the sacrifices of those who serve our country. This year, we also note the execution of John Allen Muhammad - better known as the mastermind behind the Beltway sniper attacks seven years ago this fall - though it may provide little solace to those here and across the region whose lives were forever changed by his actions.

- Professional photographer/friend of JUTP Chip Py sent us these photos of the memorial to Beltway sniper victims in Brookside Gardens to victims of the sniper attacks. Engraved in the stone is the following unattributed statement: "Linger here and reflect on those lost to violence, hope for a more peaceful world, seek a reverence for life among all people."

- Slate magazine has a photo slideshow of each of the fourteen locations where the snipers struck, eight of which were in Montgomery County. Ordinarily, I'd make fun of the inaccurate locations (White Flint, Md.? Aspen Hill, Va.?), but that would be insensitive today. - If you haven't already, check out our three brief posts on the new Silver Spring Library, which after years of discussion and frustration has finally yielded a finished product - or, at least, a bunch of pretty drawings.

- The Good Eatin' in Wheaton blog discovers that Nava Thai's recent nod from food critic Tom Sietsema has made the restaurant very popular. "Despite having lots of tables these days, it was packed, we had to wait a half hour before sitting down," the blogger writes. "Apparently Nava has become better known than I had realized."

- The county's Department of Transportation has some new photos (or, at least, what I think is a photo) of the White Oak Transit Center, also under construction. Kinda bummed at how blah the new bus shelters look, especially compared to the recently-completed transit center in Germantown, where lowly bus riders get to wait at a place that looks not unlike the veranda at a Southern bed-and-breakfast. Sigh . . .
at 9:24 AM

"mastermind" is giving him WAY too much credit

Hey, the more people who go to Nava Thai, the greater chance I'll have a getting a seat at the truly best Thai restaurant around, Ruan Thai.